A U.S. Army Formula Shows What Sarin Gas Would Do to Your Neighborhood 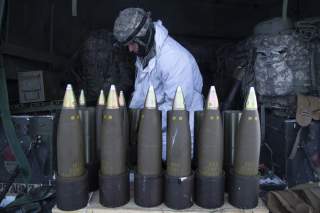 Syria’s brutal civil war has put the horrors of chemical weapons back on many people’s minds. But it’s still difficult to imagine the actual effects and scale of attacks with these terrible weapons.

Just how much of sarin — a deadly nerve agent commonly mentioned in reports about Syria — would it take to kill everyone in your neighborhood?

Thanks to the Freedom of Information Act, War Is Boring can offer some help in answering that morbid question. We obtained a U.S. Army training manual from 1957 that has a simple formula to figure out the answer.

Thankfully, the results demonstrate how difficult it would be to launch an effective gas attack on a prepared military unit. But there’s little comfort in that. What makes sarin a relatively inefficient battlefield weapon makes it frightfully lethal to civilians.

And that’s an important lesson, as armies in the world still possess — and occasionally use — such weapons to horrendous effect.

Though a feature of earlier conflicts, chemical weapons were a particularly grim hallmark of World War I. The aftermath pushed many countries, in Europe especially, away from the idea of fighting with toxic liquids and gasses — at least against each other.

Though none of the noxious weapons saw combat on a worldwide scale during World War II, most armies involved had chemical arsenals at the ready, just in case. This remained true after the war ended.

As the Cold War took off, the United States rapidly expanded its stockpiles of both chemical and biological weapons in case of a new global conflict with the Soviet Union and its allies.

“Biological and chemical warfare have two principle objectives,” the narrator in one now declassified U.S. Navy training film explained. These are “to reduce food by destroying his crops and his food-producing farm animals and to incapacitate the enemy’s armed forces and that portion of his human population that directly supports them.”

One of the Pentagon’s primary chemical weapons was sarin, or as the U.S. military codenamed it, G.B. In 1938, the German firm I.G. Farben — which also developed Zyklon B, used in concentration camp gas chambers — first synthesized the compound as part of research into advanced pesticides.

Chemically, there are several similarities between organophosphate nerve agents and pest-killing compounds in the same family. Weapons in this category, such as sarin, hamper the nervous system from talking to the body’s organs, often causing victims to suffocate to death because they can’t control their breathing.

While ghastly, releasing chemical agents is a finicky business. Temperature, winds and other environmental factors affect where the particles go and how far — and how long — they stay in the air or on the ground.

The declassified Army training handbook outlines these factors and provides a simple formula troops could use in the field to plan chemical attacks with howitzers and rocket artillery. With the equations in hand, soldiers only needed eight basic data points, along with a number of extra caveats, to get a rough estimate of how many shells or rockets they would have to fire into enemy positions.

At the time, the ground combat branch had sarin-filled 105-millimeter and 155-millimeter shells and 4.5-inch rockets. Artillery pieces and self-propelled howitzers could lob these chemical-packed projectiles.

The formula spat out the total number of rounds necessary to kill 40 to 80 percent of the opposing troops in a given area. Oh, and if you only wanted “moderate casualties” — 20 to 40 percent dead — you just multiplied the base amount of G.B. per hectare by 0.4 right at the start.

How easy is it to do? Lets run through the formula for my neighborhood in Northern Virginia right now.

The first step is determining the temperature, in Fahrenheit, and the area’s “gas discipline.” The latter variable is basically how fast I would expect everyone to put on their protective gear, if they have any at all.

The high in Alexandria, Virginia on Jan. 28, 2017 was an estimated 47 degrees. I don’t think anyone near me has gas masks, so I’ll go with the “no protection” option. Suffice to say, I’d be in the same bad situation.

Now, I have to figure out what weapons to use and how long I want my gas barrage to last — four minutes, 30 seconds or all the rounds raining down at once, a tactic called “time-on-target.”

For this exercise, I’m sticking with a group of 105-millimeter howitzers. We’ll choose a 30-second-long attack. This all means, I’ll need 38 pounds of G.B. per hectare, according to the charts.

Now we run through the caveats. We’re sticking with heavy casualties rather than moderate, as I don’t live in rugged mountains or heavily wooded terrain, no one here lives in bunkers with limited ventilation, the temperature isn’t below 20 degrees and I’ll just assume the wind isn’t over 12 miles per hour today.

So, it’s still 38 pounds per hectare. If any of those factors had been in issue, we would have multiplied the total weight of G.B. necessary for each one.

I’ll say my immediate neighborhood is approximately 600 meters by 800 meters — that’s 48 hectares. And we need to put 38 pounds of sarin in each one of those boxes, or 1,824 pounds in total.

Each 105-millimeter shell contains 1.8 pounds of toxic chemicals. So, to kill 40 to 80 percent of the people in my neighborhood, artillery units would have to fire off at least 1,014 105-millimeter projectiles — I rounded up to the next shell — in 30 seconds.

What the manual doesn’t mention is just how many howitzers you’d need to meet these requirements. A reasonably well trained crew with one of the Army’s M-119 105-millimeter howitzers can only safely fire around four shells every 30 seconds for about eight minutes.

So, for a barrage lasting 30 seconds in total, you’d need more than 250 howitzers to saturate my neighborhood — and you still might only kill 40 percent of the residents. With the exact same parameters, a synchronized time-on-target attack — where the enemy would have far less time to react — would still need to drop 25 pounds of G.B. into each hectare.

Needless to say, its pretty easy to see how difficult it would be to launch an effective sarin attack against a military target with advance warning and protective gear.

Fortunately, most governments agree and have chosen to reduce or eliminate their chemical stockpiles. In 1933, the United States signed up to the Chemical Weapons Convention and began steadily dismantling what remained of its chemical arsenal.

By 2016, the U.S. Army had already destroyed 90 percent of its chemical weapon stockpile. Russia as of 2016 has reduced its chemical stockpile by around 93 percent, according to Kremlin officials. In 2017, both Russia and the United States could begin to eliminate their remaining chemical arsenals entirely.

But all in all, it’s not surprising the greatest victims of chemical attacks in Syria have been innocent people. These are weapons which in the 21st century are primarily means for killing civilians — and their presence in parts of the world, such as North Korea, should be a continuing concern for us all.