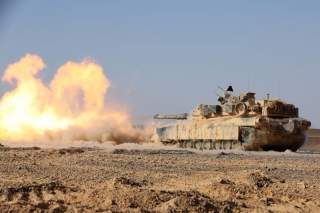 The Army is preparing to configure Abrams tank prototypes able to control nearby “robotic” wing-man vehicles which fire weapons, carry ammunition and conduct reconnaissance missions for units on the move in combat, service officials said.

Although still in the early stages of discussion and conceptual development, the notion of manned-unmanned teaming for the Abrams continues to gain traction among Army and General Dynamics Land Systems developers.

Algorithms are progressing to the point wherein they will be able to allow an Abrams tank crew to operate multiple nearby “wing-man” robotic vehicles in a command and control capacity while on the move in combat.

“As I look to the future and I think about game-changing technologies, manned-unmanned teaming is a big part of that. There’s a set of things that we think could be really transformational,” Bassett said.

This kind of dynamic could quickly change the nature of landwar.

Autonomous or semi-autonomous robotic vehicles flanking tanks in combat, quite naturally, could bring a wide range of combat-enhancing possibilities. Ammunition-carrying robotic vehicles could increase the fire-power of tanks while in combat more easily; unmanned platforms could also carry crucial Soldier and combat supplies, allowing an Abrams tank to carry a larger payload of key combat supplies.

Also, perhaps of greatest significance, an unmanned vehicle controlled by an Abrams tank could fire weapons at an enemy while allowing the tank to operate at a safer, more risk-reducing stand-off range.

As unmanned vehicles, robotic platforms could be agile and much lighter weight than heavily armored vehicles designed to carry Soldiers into high-risk combat situations. By virtue of being able to operate without placing Soldiers at risk, tank-controlled ground drones could also be used to test and challenge enemy defenses, fire-power and formations. Furthermore, advanced sensors could be integrated into the ground drones to handle rugged terrain while beaming back video and data of enemy locations and movements.

Manned Abrams tanks, therefore, could make use of advanced thermal sights, aided by robotic sensors, to locate and destroy enemies at ranges keeping them safe from enemy tank fire. Sensor robots could locate enemy artillery and rocket positions, convoys and even some drones in the air in a manner that better alerts attacking ground forces.

Some of the early prototyping is being explored at the Army’s Tank Automotive Research, Development and Engineering Center, Warren, Mich.

Army Chief of Staff Mark Milley has consistently emphasized that manned-unmanned teaming and autonomy central to the Army’s preparations for the future, Bassett explained.

“The Chief has been really candid with us that what whatever we build for the future has that concept in mind that we are laying the architectures in that will support that,” he added.

Thus far in the Army, there are both tele-operated vehicles controlled by a human with a lap-top and joystick as well as platforms engineered with autonomous navigation systems able to increasingly perform more and more functions without needing human intervention.

For instance, TARDEC has developed leader-follower convoys wherein tactical trucks are engineered to autonomously follow vehicles in front of them. These applique kits, which can be installed on vehicles, include both tele-operated options as well as automated functions. The kits include GPS technology, radios, cameras and computer algorithms designed for autonomous navigation.

Also, the Army has already deployed airborne manned unmanned teaming, deploying Kiowa and Apache helicopters to Afghanistan with an ability to control the flight path and sensor payload of nearby drones in the air; in addition, this technology allows helicopter crews to view real-time live video-feeds from nearby drones identifying targets and conducting reconnaissance missions. Autonomy in the air, however, is much easier than ground autonomy as there are less emerging obstacles or rugged terrain.

The Army is by no means the only service currently exploring autonomy and manned-unmanned connectedness. The Air Force, for instance, is now developing algorithms designed to help fighters like the F-35 control a small fleet of nearby drones to conduct reconnaissance missions, test enemy air defenses and carry ammunition.

In similar fashion, Navy engineers are working on an emerging fleet of Unmanned Surface Vehicles able to create swarms of attacks small boats, support amphibious operations by carrying supplies and weapons and enter high-risk areas without placing sailors at risk.

These developments represent the cutting edge of technological progress in an area known as “artificial intelligence.” Among other things, this involves the continued use of computers to perform an increasingly wider range of functions without needing human intervention. This can include gathering, organizing or transmitting information autonomously.

The technological ability for an autonomous weapons system to acquire, track and destroy a target on its own – is already here.

Pentagon doctrine is clear that, despite the pace at which autonomous weapons systems are within the realm of realistic combat possibilities, a human must always be in-the-loop regarding the potential use of lethal force. Nevertheless, there is mounting concern that potential adversaries will also acquire this technology without implementing the Pentagon’s ethical and safety regulations.

At the same time, despite the promise of this fast-emerging technology, algorithms able to match the processing power of a human brain are quite far away at the moment. Engineering a robotic land-vehicle able to quickly process, recognize, react and adjust in a dynamic, fast-changing combat environment in a manner comparable to human beings, is a long way off, scientist explain. Nonetheless, this does not mean there could not be reasonably short-term utility in the combat use of advanced autonomous vehicles controlled by a nearby Abrams tank crew.