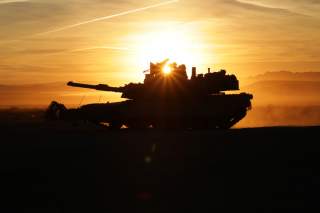 The Army is now expanding a new, high-speed, vehicle-mounted force tracking technology to include a wider range of combat platforms such as Stryker vehicles, Bradleys and Abrams tanks, service officials said.

The system, now on Army jeeps or HMMWVs, allows Soldiers in combat to instantly know their location in relation to fellow Soldiers, enemy locations and surrounding terrain, service developers said.

The technology, called Joint Battle Command – Platform, has already been fielded with the Army’s 3rd Infantry Division and 10th Mountain Division. Future plans include a wider deployment across the Army with units traveling to strategically vital operational parts of the globe, Army officials told Scout Warrior.

The force tracking system, called JBC-P, uses a high-speed satellite network to show blue and red icons on a moving digital map – letting units on-the-move know exactly where they are in a fast-moving, dynamic combat environment.

For instance, the vehicle-mounted display technology could prove essentially significant in mountainous terrain such as Afghanistan where both friendly and enemy forces are maneuvering quickly to gain an advantage in an ongoing firefight. If U.S. Soldiers are able to quickly see where their fellow Soldiers are in relation to both the surrounding terrain and enemy forces, they will retain a combat-relevant strategic advantage.

U.S. Special Forces have also expressed interest in the technology, Army officials said. JBC-P could be particularly relevant to Special Operations units as they often deploy in small, self-contained mobile units disconnected from a larger force.

As one might expect, improving latency or lag time is a crucial element to combat success. With the previous Blue Force Tracker system, units on-the-move in vehicles needed to wait up to five minutes for digital maps to refresh and show new or emerging information. With BFT 2, that latency is reduced to as quick as 10-seconds.

In the midst of a firefight, knowing the location of enemy and friendly forces could wind up being a matter of life and death.

JBC-P uses Blue icons for friendly forces and can place Red icons for enemy forces when their locations are learned. They system also uses a messaging and chat technology which allows Soldiers to connect with one another in combat and share key information.

When using the technology, Soldiers were drawn heavily to the value of the instant chat function, Olmstead said.

“It has a drag and drop box on the screen and instantly create a chat room. It is a lot easier and more intuitive. Soldiers preferred chatting just like young people do in the civilian world. In some cases, they relied exclusively on chat. This provided brigade staff and brigade leadership a written record of communications during an operation,” he said.

The JBC-P network is also what’s called a “beyond-line-of-sight” technology, meaning vehicles in transit can connect with one another over rigorous terrain or vast distances, well beyond the range at which they could see one other with the naked eye.

The force-tracking software is connected to JV-5 hardware computer technology and a system called Mounted Family of Computer Systems.

JBC-P is also integrated with a technology called Tactical Intelligence Ground Reporting, or TIGR, which provides a historical intelligence data base giving Soldiers combat-relevant information along a given route.

“We have taken the majority of the capability that TIGR provides an integrated those into the JBC-P software. This included cataloguing area structures, obstacles and things you would normally be reporting on when creating patrol reports,” Olmstead added.   “This will give you the imagery available along a route. It will show you the history of what has happened over the last week or last month. You can see what has been happening on a route before you go onto a patrol,” she said.

A future step for the JBC-P platform will be the integration of android computing technology in order to allow the system to quickly embrace emerging new technologies, Olmstead explained.

“We will take android technology and layer it on top of JBC-P. We will be able to easily bring new applications and functionality in and test them without needing to go back and re-test software code,” he said.