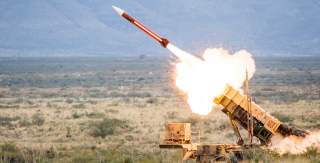 The US Army and key allies around the world are now analyzing a radar and targeting upgrade to the Patriot missile able to increase the range of threats it can destroy -- to include a wider range of drones, rotary wing aircraft, cruise missiles, extended range tactical ballistic missiles and high-speed aircraft.

The Raytheon prototype upgrade includes the addition of new technology designed to keep pace with fast-emerging threats well above and beyond the tactical ballistic missiles for which the weapon was initially designed.
"The range of the threats has grown well beyond tactical ballistic missiles that everybody was focused on," Joe DeAntona, Vice President for Business Development and Strategy, Raytheon Integrated Air and Missile Defense, told Scout Warrior in an interview.
This prototype of Raytheon’s proposed new Patriot radar uses two key technologies – active electronically scanned array, which changes the way the radar searches the sky; and gallium nitride circuitry, which uses energy efficiently to amplify the radar’s high-power radio frequencies, a Raytheon statement said.
The so-called "AESA GaN" radar enables a 360-degree capability and is more powerful, more efficient and cheaper to run and maintain, Raytheon developers added.
This proposed Raytheon upgrade is happening alongside current Army efforts to upgrade the radar, fire control technology and flight software for the PATRIOT missile --- as a way to sharpen its target tracking ability against approaching enemy attacks.

The Army awarded a contract-extension with Lockheed Martin to further develop these technological advances for the weapon.

The missile system also functions in tandem with the Terminal High Altitude Air Defense, THAAD, system to provide the U.S. with a “multi-tier theater defense.”

To intercept an incoming missile, it steers towards a predetermined intercept point chosen by its ground-based fire solution computer, selects the proper trajectory, and then applies a direct, body-to-body hit on the target.

In service since the early 80s, Patriot missiles have been upgraded several times, including this latest MSE software improvement. Recent tests have been designed to asses an even newer target-tracking technology called Post Deployment Build, or PDB-8, service officials explained.

The full $13.4 million modification amount agreed upon for this most recent contract was obligated at the time of the award. Work will be performed at the Army Reserve Center in Grand Prairie, Texas and at the White Sands Missile Reserve in White Sands, New Mexico. The estimated completion date is January 30, 2018. Army Contracting Command, is the contracting activity.