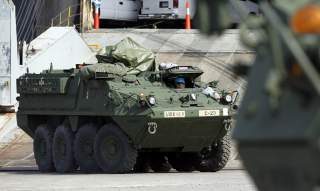 As part of a vigorous effort to address a modern threat landscape, Linson explained that the Army is working to recover short-range air defense weaponry after scaling it back following the Cold War.

The new variant integrates an Avenger launcher turret onto the back of a reconfigured Stryker vehicle to bring offensive and defensive fire-power close into the fight where armored Strykers can operate more effectively than tactical vehicles.

GD engineers designed the vehicle by removing parts of the back of a Stryker to create a platform with a Boeing-built Avenger turret mounted onto the chassis, Kendall Linson, Business Development Manager, Stryker and Specialty Wheeled Vehicles, General Dynamics Land Systems, told Scout Warrior in an interview.

“We learned of the Army’s need for short-range air defense capability and quickly came up with this solution to mount the missile capability onto the Stryker,” he said.

The effort marks the first time an Avenger launcher has been built onto a Stryker; Avenger has previously been built into the back of an Army HMMWV.

“A Stryker brings survivability and mobility. A less-armored vehicle can only go so far because you have to protect the asset. A Stryker can go to the forward edge of the battlefield,” Linson said.

As part of a vigorous effort to address a modern threat landscape, Linson explained that the Army is working to recover short-range air defense weaponry after scaling it back following the Cold War.

“After the wall came down, the Army recognized it had less of a need for short-range air defense. Now, with recent operations in Europe, we recognize the need to integrate SHORAD back into the Army,” Linson said.

In recent years, small, lethal drones and other kinds of closer-in attack threats continue to proliferate around the globe and find their way into modern warfare.

“When Russia invaded Ukraine, they were using drones in their operations which can now pose a real threat to our formations,” Linson explained.

The new weapon is slated for an Army-GDLS demonstration “shoot-off” firing this September at White Sands Missile Range, N.M. The Stryker MSL will attack and destroy two air targets and one land target at the shoot-off.

GDLS has a “growth plan” which includes integrating a 30mm weapon onto the Stryker MSL in the future.

As a way to accommodate a wider range of weapons and integrate emerging ammunition or missiles in the future, Boeing has engineered a particular interface into the Avenger turret system.

“The interface allows the users to change the missiles and add new software as needed,” Linson said.

The need to adjust weapons is of particular importance because drone technology is evolving quickly and enemy drones can be difficult to target.

The new Stryker, built by GDLS with internal research and development dollars, is entirely consistent with the Army’s evolving acquisition strategy.  Senior service leaders tell Scout Warrior the Army is making a decided effort to engineer new platforms and incorporate innovations into existing weapons systems with an ever-increasing emphasis upon being prepared for major power warfare.  As a result, platforms like the Stryker are being upgraded to address near-peer threats as well as new asymmetrical and counterinsurgency challenges. In fact, the Army is now working on new doctrine which, among other things, emphasizes the need for the service to move beyond the COIN focus of the last decade and a half and prepare for the prospect of full-scale mechanized warfare, senior Army leaders told Scout Warrior.

The Army is pursuing the SHORAD technology as part of a “directed requirement” effort, meaning the service wants to fast track development and avoid lengthy delays often associated with the traditional acquisition process.

General Dynamics Land Systems has an extensive background when it comes to the accelerated development of innovations for the Stryker. Several years ago, GD moved quickly to add protective “double-V-hull” structures underneath Stryker vehicles to deflect blast debris from IEDs away from the vehicle. Newly engineered double-v-hull Strykers were sent to Army units in Afghanistan on a rapid turn-around expedited basis.

At least eight vehicles are now being tested as part of a broader GDLS effort to deliver 81 of the new Strykers to the Army by June of next year, Linson said.

Compared to an existing M2 .50-cal machine gun mounted from Strykers, the new 30mm weapon is designed to improve both range and lethality for the vehicle. The new gun can fire at least twice as far as a .50-Cal, GDLS developers said.

The 30mm cannon, made by Kongsberg, can use a proximity fuse and fire high-explosive rounds, armor-piercing rounds and air burst rounds.

The new, more-powerful Orbital ATK XM 81330mm 30mm cannon, which can be fired from within the Stryker vehicle using a Remote Weapons Station, will first deploy with the European-based 2nd Cavalry Unit. It is slated to be operational by 2018.

During live-fire testing at Fort Benning, Ga., the 30mm cannon was able to demonstrate firing ability out to ranges of 3,000 meters.

Also, while the .50-Cal is often used as a suppressive fire "area" weapon designed to restrict enemy freedom of movement and  allow troops to maneuver, the 30mm gun brings a level of precision fire to the Stryker Infantry Carrier that does not currently exist.

Dismounted infantry units are often among the first-entering “tip-of-the-spear” combat forces which at times travel to areas less-reachable by heavy armored platforms such as an Abrams tank or Bradley Fighting Vehicle. Certain terrain, bridges or enemy force postures can also make it difficult for heavier armored vehicles to maneuver on attack.

The Army and GDLS are also testing laser weapons on Stryker vehicles as part of an overall strategy to employ a range of weapons against air threats. Linson emphasized that having several interwoven efforts for air defense integrated onto Stryker vehicles will help forces respond as needed to different kinds of attacks.

Kris Osborn is the Managing Editor of Scout Warrior, where this article originally appeared.