US Army's XM 25 "Airburst" Weapon: A Game Changer Headed for the Junk Yard? 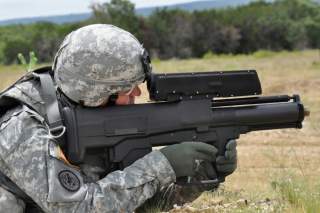 However, despite the initial promise of prototypes of the technology in combat in Afghanistan as an emerging way to bring a decisive advantage to Soldiers in firefight, the future of the XM25 is now uncertain due to ongoing Army needs, requirements, weapons inventory assessments and budget considerations, service officials told Scout Warrior.

The Army’s XM25 Counter Defilade Target Engagement airburst weapon system, in development for several years, was used to destroy Taliban fighters hiding behind grape-growing walls in Afghanistan during a Forward Operational Assessment of the weapon several years ago. Extensive analysis and adjustments to the weapon followed this operational combat evaluation, Army officials explained.

Army and Pentagon weapons developers and budget planners are now deliberating plans for the weapon, which could be formally produced and deployed within the next several years – or passed over due to fiscal constraints.

While the XM25 would clearly be useful in a major force-on-force engagement or great power conflict, airburst attacks have particular value in a counterinsurgency type-fight wherein enemies seek to use terrain, building, rocks, ditches or trees to protect themselves from being targeted.

By attacking with an “airburst” round, Soldiers do not have to have a linear view or direct line of sight to an enemy target; if they know an enemy is behind a rock or tree (in defilade) – the weapon can explode above or near the location to ensure the target is destroyed.

The weapon uses laser-rangefinder technology to fire a high-explosive airburst round capable of detonating at a specific point near an enemy target hidden or otherwise obscured by terrain or other obstacles, Army developers have explained.

Program managers had been seeking to expedite development of the system, refine and improve the technology, and ultimately begin formal production by the fall of 2014, however its current trajectory is now unclear.

"The XM25 brings a new capability to the Soldier for the counter-defilade fight, allowing him to be able to engage enemy combatants behind walls, behind trees or in buildings," former XM25 program manager Col. Scott Armstrong, previously explained in an Army statement.

"The weapon fires a programmable airburst 25mm smart round. It consists of the weapons system with a target acquisition control system mounted on top," Armstrong said.

The XM25 represents the state-of-the art in terms of airburst technology, consisting of a programmable 25mm round, a sensor and a fire-control system, former Army Chief Scientist, Dr. Scott Fish, told Army.mil following the assessments.

Using laser rangefinder technology, the fire control system on the weapon uses computer technology to calculate the distance the round must travel in order to explode at a particular, pre-determined point in space, he explained.

"The laser rangefinder sends a pulse of light out to the target. This light pulse hits the target and is reflected back, allowing the fire control system to calculate the distance based on the time it takes the light pulse to travel," Fish said. "Since the speed of light is known, the exact distance to the target can then be determined. Once you determine how far the distance is to the target, a computer then calculates how long it will take the round to get there."

The sensor and computer in the fire control system calculate the time it will take the round to reach the target by factoring in the distance it needs to travel and the speed at which it travels, Fish added.

The 25mm round is engineered with a small, chip-based sensor able to track distance in flight so that the round detonates at precisely the right distance, Fish said.

Earlier prototypes of the XM25 completed 14-months of Forward Operational Assessments in Afghanistan, an effort designed to provide Soldiers in combat with the advantage of having airburst technology and harvest important feedback needed to refine development of the weapon's final design for production.

"The Army has learned many valuable lessons from these deployments regarding how the weapon can be deployed and how tactics can be changed to better refine the design of the weapon. Based on feedback from Soldiers and contractor testing, we have already incorporated more than 100 improvements to the systems related to ergonomics, performance and fire control," said Armstrong.

During its initial Forward Operational Assessment, the XM 25 provided a decisive advantage to Soldiers in combat in Afghanistan, Army officials said.

Units using several prototype XM25s in theater were accompanied by teams of weapons experts focused on analyzing the system's performance with a mind to making needed improvements, Armstrong said.

While on patrol in Southern Afghanistan several years ago, Soldiers with the 3rd Brigade, 10th Mountain Division used the XM 25 to engage and successfully defeat enemy forces hiding behind three-to-four foot walls used by Afghans to grow grapes, Command Sgt.

"We defeated any enemy force that we deployed the weapon against. The XM25 is a devastating weapons system that changes the face of battle when we are in direct fire contact with the enemy," he said.