A U.S. Attack on North Korea: Could China Retaliate Against Taiwan? 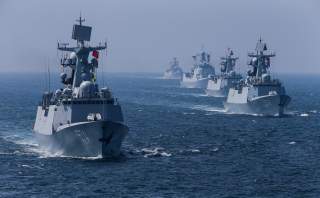 As it has in much of 2017, the crisis over North Korea’s nuclear and missile program is likely to haunt Northeast Asia for a good part of 2018. Beyond the immediate issue of Pyongyang’s weapons development is the interlocking nature of the conflict, which under certain circumstances—such as a decision by the United States to use force against North Korea—could spark other contingencies in the Asia Pacific.

The pivotal actor in all this is China, Pyongyang’s sole benefactor and a rising power in its own right, whose reaction to a U.S.-led war in the Korean Peninsula could determine the future of the entire region. This article does not aim to evaluate the merits, moral or strategic, of taking military action against North Korea to break the logjam. Instead, with the prospects of war seemingly becoming likelier, it looks at the potential repercussions of the Trump administration choosing the military option to resolve the impasse by presenting the problem as the continuation of a conflict, regional in nature, that began when the United States intervened in the Korean War in 1950.

That conflict, which resulted in stalemate in 1953, is the moment when the People’s Republic of China (PRC) “got locked into the same Cold War environment as the USSR in the eyes of the United States,” as Kerry Brown notes in China’s World: What Does China Want? While we can debate whether the Cold War between the United States and the USSR ever really ended with the collapse of the Soviet Union (“Eurasianism,” which Charles Clover describes in his excellent book Black Wind, White Snow: The Rise of Russia’s New Nationalism, suggests that it did not), it is beyond doubt that the ideological confrontation never ended in East Asia and has regained potency with the ascendancy of Chinese revisionism and its efforts to displace America as the hegemonic power in the Indo-Pacific region.

China’s relationship with the Korean War is infused with a deep historical grievance stemming principally from the repercussions of that war, which led to the isolation and containment of the PRC. For Beijing, the chief symbol of that humiliation is the decision by U.S. President Harry S. Truman in June 1950 to deploy the U.S. Seventh Fleet in the Taiwan Strait to prevent the Korean conflict from engulfing the entire region amid indications that China had been preparing for an attack on the island. The neutralization of the Taiwan Strait drew an indelible line at sea that remains part of the conflict today. That same line, and its ramifications, was reconfirmed during the 1995–6 Taiwan Strait Missile Crisis, when interventions by the Seventh Fleet once again humiliated the Chinese regime and arguably acted as the catalyst for the Chinese Communist Party (CCP) to launch an extensive program of military modernization. A product of an unfinished Cold War, the Taiwan Strait has become all the more problematic with the democratization of Taiwan and a deepening nationalism that vehemently opposes unification with the PRC. In Beijing’s eyes, however, both are the same thing—or at least, the outcomes are no different: continued American support for Taiwan, whether because it is a fellow democracy or due to its geographical location, is part of a strategy of containment.

The CCP therefore has not forgotten the humiliation of 1950 and the subsequent isolation of the PRC, of which a de facto sovereign Taiwan is a painful reminder. More than anything else, that symbol is something which the Chinese regime, arguably at its most hawkish and nationalistic since the Mao Zedong years, would like to obliterate.

I would argue, therefore, that a decision to launch military strikes against North Korea would represent the most dangerous period for Taiwan’s survival, as this could prompt Beijing to seize the opportunity created by the American focus on North Korea to resolve its historical grievance. In other words, rather than join Pyongyang in a direct (and potentially disastrous) military conflict with the United States, Beijing could use the distraction to launch its own military strikes against Taiwan, only this time with little likelihood that Washington would order the Seventh Fleet to interpose itself the way it did in 1950 and 1995-6. Already hampered by China’s anti-access/area-denial (A2/AD) capabilities, it is hard to imagine that the United States could spare sufficient capabilities to come to Taiwan’s defense at a time when it is undertaking major military action against North Korea—a daunting endeavor in its own right.

A war on two fronts in East Asia (North Korea and the Taiwan Strait) would pose a serious challenge to the American military. Russia, which with China shares an interest in eroding the United States’ global footprint, could furthermore assist China during a North Korean contingency by causing trouble in its own backyard, such as in Ukraine, and in the process overwhelm Washington by forcing it to address three simultaneous conflict scenarios.

The intensification of Chinese military activity around Taiwan in recent months is already an indication of Chinese signalling and a warning that U.S. military action against Pyongyang could result in Chinese retaliation elsewhere. According to Taiwan’s latest national defense report released this week, People’s Liberation Army (PLA) aircraft and vessels operated near Taiwan’s Air Defense Identification Zone (ADIZ) on twenty-five separate occasions between August 2016 and December 2017. Those sorties involved passages through the Bashi Channel between Taiwan and the Philippines, and the Strait of Miyako between Japan and Taiwan. Although much of these passages are natural for a military that is expanding into the West Pacific, the growing PLA presence in the area has allowed the Chinese military to familiarize itself with Taiwan’s immediate environment and to collect intelligence against it.

Despite the high risks entailed by military action against Taiwan, the potential costs of doing so for China would be much lower than a direct confrontation with the U.S. military in the Korean Peninsula. Even if the United States decided to assist Taiwan, the lines of communication between U.S. military facilities in the region are much longer than they are for a Korea contingency.

Moreover, Beijing could present retaliatory action against Taiwan as a purely “defensive” measure in response to U.S. aggression in the region. The outcome of a successful military campaign against North Korea would likely result in the occupation of the North by the U.S. military or its allies—in either case, this would be perceived as further signs of containment of China. The prospects of such an untenable situation could therefore compel Beijing to take action elsewhere to break out of that new round of (perceived) containment. Taiwan is a logical choice, as is the South China Sea, where China has benefited tremendously under President Donald Trump’s fixation with North Korea. Inaction as its ally North Korea is taken out by the U.S. military could also have severe reputational costs for the CCP within the PLA and among an increasingly nationalistic Chinese public, thus creating additional incentives for Beijing to take some countervailing action outside the immediate theater of operations. Put differently, President Xi Jinping’s own rhetoric in recent years could make it impossible for his regime not to respond to U.S. military action, even if inaction is its preferred option. Given Taiwan’s unique role as part of the “great rejuvenation of China,” taking action against it while the United States topples one of Beijing’s regional allies could be seen as an inviting proposition.

Although it would be presumptuous to try to predict how Beijing would react to a U.S. military campaign against North Korea, analysis of history, perceived grievances, domestic pressures in China, the military balance of power in the region and China’s fears of containment leads one to conclude that a North Korean military contingency could engender the most dangerous period for Taiwan’s security since the 1950s. Consequently, should the Trump administration conclude that diplomacy and sanctions have failed and that military action against Pyongyang must now be taken, it will be essential that Washington communicate its intentions with allies within the region, including Taiwan, which will have to take the necessary precautions to counter possible out-of-theater retaliation by China. If Taiwan cannot do it alone, and if the United States does not have the capabilities to ensure proper assistance, other regional allies which have a stake in the continuation of the existing order (of which a sovereign Taiwan is a crucial component) will have to step in to once again “neutralize” the Taiwan Strait.

Chinese retaliation against Taiwan amid a U.S. military move on North Korea would be an occasion for Beijing to redress two historical wounds inflicted by Washington in 1950 and again in 1995–6. As it weighs the pros and cons of using force against Pyongyang, the Trump administration must also evaluate the potential consequences for the stability of the entire Indo-Pacific region. Victory over North Korea could be pyrrhic indeed if it resulted in a countervailing Chinese assault on Taiwan.