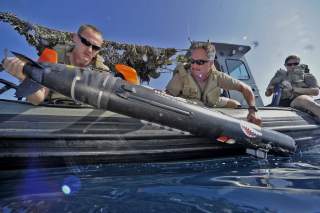 The Chinese seizure of a U.S. underwater drone in waters near the Philippines raises significant international concern and underscores the growing strategic and tactical significance of Unmanned Underwater Vehicles, or UUVs.

“Using appropriate government-to-government channels, the Department of Defense has called upon China to immediately return an unmanned underwater vehicle that China unlawfully seized on Dec. 15 in the South China Sea while it was being recovered by a U.S. Navy oceanographic survey ship,” a statement from Pentagon spokesman Peter Cook said.

Cook’s statement went on to specify that the Chinese seized an unclassified "ocean glider" system used around the world to gather military oceanographic data such as salinity, water temperature, and sound speed. The “ocean glider” was conducting routine operations in accordance with international law, Cook said.

While aerial drones have experienced an explosion in combat and strategic use since the beginning of Operation Iraqi Freedom in 2003, it is only in recent years that UUVs have gained added significance for the U.S. military. For instance, the U.S. Army operated merely a handful of drones at the beginning of OIF before growing the fleet exponentially to thousands of UAS in following years.

Many Analysts believe UUVs are on the cusp of a similar explosion.

According to information compiled by an analytics firm called Govini, U.S. government defense spending on UUV programs this year was $605 million – a 23-percent increase over the prior five-year average.

“Although the U.S. likely leads the world in unmanned underwater vehicle development, the platform is in the earliest stage of development, and hasn’t yet attracted the investment of the more mature aerial platforms. As a result, the seizure is significant because it potentially reveals technology that represents the seeds of a future advanced capability,” Govini CEO Eric Gillespie said in a written statement.

Govini information further adds that UUV research and development amounted to $138 million in 2016, a 42-percent increase over the previous five-year average. More than 280 contractors contribute to the construction of UUV platforms, the information said.

“The underwater domain is a new frontier and as we track the incoming Trump Administration's defense spending we expect contracting for unmanned underwater vehicle platforms, sonar, and R&D to only accelerate in the years ahead,” Gillespie added.

The Office of Naval Research has been using “sea glider” UUVs in the Arctic to assess the environmental changes caused by the increased pace of melting ice in the region. The underwater drones in the Arctic have, in recent years, been assessing the temperature and salinity of the water column as a means to discern the pace of change in the region.

Navy submarines are also advancing substantial plans to launch and retrieve UUVs for reconnaissance missions from submarines; some configurations involve using a submarine missile tube to launch a UUV. UUVs, naturally, can send sonar to forward locations and collect data without subjecting manned submarines to additional risk. Futhermore, it is conceivable that UUVs will also be used as offensive weapons in coming years, Navy officials have explained.

According to the Pentagon statement, a U.S. Navy ship on a mission to retrieve the drone made radio contact with the Chinese vessel which has apprehended it.  A Chinese Navy PRC DALANG III-Class ship launched a small boat and retrieved the UUV.

“The radio contact was acknowledged by the PRC Navy ship, but the request was ignored.  The UUV is a sovereign immune vessel of the United States. We call upon China to return our UUV immediately, and to comply with all of its obligations under international law," Cook said.