A U.S.-China War: A Battle between Networks 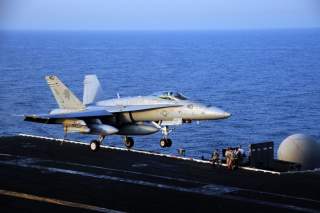 A U.S.-China war would be a battle between networks, according to one prominent security analyst.

Speaking to a packed room of mostly undergraduate students at George Mason University earlier this week, Elbridge Colby, the Robert M. Gates Fellow at the Center for a New American Security (CNAS), gave a sweeping overview of the budding security competition underway in the Western Pacific between the United States and China.

In an hour long talk sponsored by the Alexander Hamilton Society’s GMU chapter, Colby began by outlining U.S. interests in the region and the challenges an increasingly aggressive China poses to them. In particular, he emphasized the necessity of preventing China from being able to successfully coerce maritime Asian states in a manner that allows Beijing to dominant the Western Pacific.

The U.S. will have to do the heavy lifting to prevent such an outcome, Colby argued. Although it is tempting to argue that regional states can balance China, the reality is that “no one else can manage it,” in light of available economic resources. On the other hand, the U.S. will likely be able to balance China even over the long-term, especially given Beijing’s slowing economy.

Strategically, Colby argued the U.S. must remain supreme in maritime Asia and retain the ability to project power in the region. This can be best achieved by building a robust defense posture immediately, instead of allowing U.S. capabilities to atrophy in the short-term and trying to play catch up later.

Operationally, Colby made the case for some form of Air-Sea Battle (ASB) that ensures the U.S. maintains escalation dominance over the People’s Republic of China (PRC). America’s ultimate goal would be to deter China from taking actions that would precipitate a war. No one, Colby stressed repeatedly during the talk, wants a Sino-American war, but “the best way to avoid a war… is to be strong.”

Should a war prove unavoidable, however, Colby argued that the U.S. would need to impose sufficient costs on China to force it to back down (something he contended a blockade was unlikely to do).  At the same time, citing statements by Deputy Secretary of Defense Robert Work, Colby said a U.S.-China war would ultimately boil down to a battle between networks. The key objective for both sides would be to “degrade the other guy’s networks,” by hitting their network’s brain and nodes.

This would mean targeting assets like radars and satellites of course, but also attacking capabilities like missile launchers and airfields. And since the PLA’s capabilities are located on Chinese territory, “we need to be prepared to attack targets on Chinese sovereign soil.” By maintaining escalation dominance, however, Colby expressed optimism that China would restrain its retaliation-- at least below the nuclear threshold.

Although none of the content of Colby’s speech would be groundbreaking to seasoned national security professionals, there was an important if implicit lesson for this group as well. Perfectly tailoring his presentation to a well-informed but non-specialist audience, Colby used mostly jargon-free prose to methodologically outline America’s interests in Asia, the threats a rising China poses to those interests and the steps the U.S. needs to take militarily to defeat those threats. At every step out of the way, he patiently explained his logic, was frank in his assessments, and acknowledged and refuted foreseeable skepticisms and counterarguments.

In doing so, Colby showed how a long-term, robust Asia policy might be sold to the American people. The value of this should not be understated. Experts capable of discussing the intricate details of ASB and the pivot with other experts are a dime a dozen. Much rarer are those who can articulate and sell these policies to the general public. Having long excelled at the former, Colby proved to be equally capable of the latter this week at GMU.

Zachary Keck will start next Monday as The National Interest’s new Managing Editor.