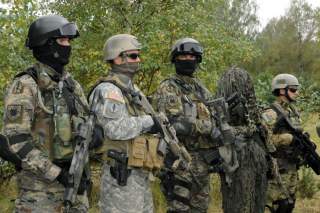 Much has been made over the past three years in Western policy statements, intelligence assessments, military plans and think tank analyses of the asymmetric or hybrid warfare conducted by Russia in the Crimea and eastern Ukraine. The essence of this supposedly new type of warfare involves the coordinated, extensive use of all the instruments of state power – classic political subversion, cyber operations, organized local paramilitary units and covert invasions by unmarked, unacknowledged forces – in addition to carefully orchestrated employment of conventional and nuclear military capabilities.

In the aftermath of the invasion of Crimea, NATO leaders began to speak of the problem posed by “little green men,” Russian military personnel operating incognito across national borders. The term has been broadened to include all the intelligence officers, special forces personnel, trained paramilitaries, subverted local security forces and disguised conventional military units deployed by Russia to conduct so called grey zone conflicts. Because the selection of specific capabilities employed are intended to achieve concrete political-military objectives, such as the seizure of Crimea and the destabilization of eastern Ukraine while minimizing the risk of a Western military response, NATO now fears that Russia will apply these capabilities on one or more member countries – the Baltics are mentioned most often – in order to fracture the Alliance.

NATO leaders and national political figures have tended to respond to Russian operations in Eastern Europe like deer caught in the headlights: frozen in panic. The threat posed by Russian asymmetric/hybrid capabilities appears too powerful to be dealt with solely by civil authorities but not so clearly military as to trigger an Article V response.

Cooler heads have pointed out that there is very little new in what Russia has done in Eastern Europe. Almost from the moment of its inception, the Soviet Union conducted extensive subversion campaigns against Western political, military and economic targets. Remember the Comintern? After World War Two, Moscow and its surrogates encouraged, supported and, in some instances, even created a host of terrorist, insurgent and paramilitary groups precisely for the purpose of destabilizing their opponents without drawing a direct response back on the Soviet Union.

With respect to Crimea and Ukraine, by the admission of Russian leaders, it took Moscow years to conduct the required intelligence operations, corrupt their government officials, penetrate their information systems, create local paramilitary units and otherwise prepare the battlespace for grey zone activities. The battle for the security of NATO and a Free Europe must take place during this preparatory period.

There are much more recent examples that should be the focus of our attention. For a decade and a half, the U.S. and its coalition partners have been up to their collective necks in a series of grey zone conflicts with asymmetric/hybrid adversaries. The pattern in Afghanistan, Iraq, Syria and elsewhere in the Middle East and North Africa is distressingly repetitive. It involves exploiting local grievances and rivalries with the help of outside resources and planning. Those behind the grey zone conflicts in the above mentioned locations seek to operate in such a way as to keep their involvement below a threshold that would force the U.S. to respond with unitive or even military measures.

The key to the success of these grey zone operations is the creation of international networks that funnel money, people, weapons, material, training aides and propaganda across international borders and those within a country that provide the operational, logistics, and intelligence backbone for the prosecution of insurgencies. In places like Iraq there were and remain competing networks representing sectarian and national forces.

Early in the fight against Islamic jihadist organizations in 2004 and 2005, the U.S. and its partners learned how to take down these networks. Most of the credit goes to two organizations and a handful of individuals: what was once the Joint Improvised Explosive Device Defeat Organization (JIEDDO), now the Joint Improvised-Threat Defeat Organization (JIDO), under its original commander, General Montgomery Meigs, and the Joint Special Operations Command (JSOC), under General Stanley McChrystal and then-Colonel Michael Flynn.

It was Meigs and JIEDDO that came up with the idea of attacking the networks providing the support, material and training for the IED campaigns that engulfed Iraq. This strategy required creating a new institutional capability for collecting, processing and disseminating actionable intelligence based on the broadest sweep of data on financial transactions, sales and transfers of precursor materials, movements of insurgent leaders as well as new recruits, and tactical communications among the terrorists. In some important instances, an understanding of these networks allowed the U.S. government to bring non-military instruments to bear to help solve the IED problem.

Sean Naylor’s impressive book, Relentless Strike, makes a compelling case for how McChrystal and Flynn turned JSOC into “an information age war-fighting machine.” JSOC gradually built an integrated capability in Iraq consisting of specialized collections systems, dedicated teams of analysts/operators, all source feeds from across the U.S. government and coalition partners and specialized computer tools to exploit available data. The result was a process known as Find, Fix, Finish, Exploit, Analyze and Disseminate. This process used the results from one mission to build information leading to the next. A number of cells were set up at major bases across Iraq to allow for focused tracking and analysis of local networks. While much of the effort was for the purpose of acquiring actionable tactical intelligence, the system developed a tremendous capability to detect, penetrate, describe, monitor and evaluate the terrorist networks on a regional and even global scale.

The experience and skills developed in the fight against al Qaeda in the last decade and ISIS in this one are available in JSOC and JIDO for application against Russian efforts to build in Eastern Europe the networks it will require in order to conduct its grey zone operations. Today, JIDO has an intelligence cell providing network analysis of drug cartels to the Department of Homeland Security. We need to help our NATO allies and the U.S. military in Europe develop the networks that can, if necessary, defeat those being established by Russia. It may be that this is not even primarily a military task and that JSOC and JIDO should be assigned to support the equivalent of the national police, FBI and Homeland Security organizations in the NATO countries. However we organize for the mission, it is clear that the U.S. military knows how to fight Russian networks. The answer is with another network, one made up of intelligence analysts, police, civil affairs officers, Special Forces, militias and national guards and conventional military forces.