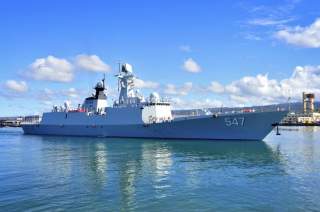 PLAN capabilities in the “Far Seas” beyond the “Near Seas” are growing too, albeit more slowly and modestly. Already increasing Chinese influence overseas, they ultimately portend more robust protection of resource and trade flows (the latter involve more than 90% by volume and 65% by value transiting major SLOCs). Most new PLAN vessels are suited for both Near and Far Seas. ONI judges that “in the next decade, China will complete its transition…to a navy capable of multiple missions around the world.”

Quality over Quantity… But Some Numbers Increasing, Too

It’s must be emphasized that China’s Navy has an air force of its own, and its portfolio is diversifying rapidly even before a carrier air wing is operational. “An array of relatively high-quality aircraft,” outfitted with increasingly-sophisticated sensors and weapons, pursue “an expanded array of missions, particularly maritime strike, but also including maritime patrols, ASW, airborne early warning, and logistics.”

Chinese undersea warfare ability is being strengthened with 3 cutting-edge Dalao-class submarine rescue ships. Numbers of amphibious vessels remain relatively constant, but China’s four (and counting) Yuzhao landing platform docks offer new capabilities, both for South China Sea island seizure campaigns and potentially even for overseas expeditionary warfare. “Increased intelligence collection deployments in the western Pacific” are being facilitated by a total of four Dongdiao-class intelligence collection vessels (one of which spied on the RIMPAC 2014 exercise off Hawaii, even as four other PLAN vessels participated in it) and the addition of five Kanhai-class survey ships.

Numbers are rising significantly in selected areas. While “at least 20” Jiangdao-class corvettes “are already in operation…30 to 60 total units may be built.” Twelve Yuan-class air independent power (AIP) submarines are in service, “with as many as eight more slated for production.” Rotary wing aircraft numbers will grow, in part to outfit PLAN surface ships, as “every major PLAN surface combatant under construction is capable of embarking a helicopter.” Because the PLAN requires more and better “eyes and ears” to support operations farther from shore, numbers of maritime patrol, airborne early warning, and surveillance aircraft are also growing. The PLAN is now introducing UAVs, with the Camcopter S-100 UAV already deployed and various indigenous systems likely to follow soon.

Finally, with respect to paranaval forces, China already enjoys what can only be described as a staggering numerical advantage in the region, and will soon be second to none in quality. It has many more Coast Guard ships (205) than Japan, Vietnam, Indonesia, Malaysia, and the Philippines combined (147). Consider how the CCG compares with neighboring counterparts in hull numbers:

Surveying Chinese hardware development reveals an extreme ASuW focus, not only in the submarine force, but also with ship-, aircraft-, and land-based missiles. Even China’s Z-9D helicopter “has been observed carrying ASCMs.” This anti-navy approach is rightly of growing concern to U.S. and allied navies, as it is designed specifically to target their ships precisely from great distances, often from beyond the reach of the ships’ defenses. ONI anticipates continuation of this ASuW trend: “A new cruiser to be built in China in the latter half of the decade will carry a variety of antisurface weapons, some of which will be newly developed.”

While Chinese ballistic missiles—including the DF-21D anti-ship ballistic missile (ASBM)mentioned multiple times in ONI’s report—have received considerable coverage, China’s numerous, increasingly potent cruise missiles have not received the attention that they deserve.Here ONI makes a contribution that bears tremendous emphasis. In a major data point never previously reported publicly by the U.S. government, ONI reveals that China’s newest destroyer class, Luyang III, “is fitted with the new vertically-launched YJ-18 ASCM.” It is also apparently deployed on China’s Song-, Yuan-, and Shang-class submarines (exact wording: “China’s newest indigenous submarine-launched ASCM, the YJ-18, extends a similar capability [as the SS-N-27/3M54E Klub ASCM] to the SONG, YUAN, and SHANG classes.”) Such ship and submarine deployment was long discussed inChinese Internet posts, and video of an apparent YJ-18 test launch appeared in November 2014. Previously termed “CH-SS-NX-13” by DoD, the YJ-18 is China’s new-generation indigenous supersonic ASCM. Apparently a Chinese copy of the 3M54E Klub (the SS-N-27B export variant) supplied with the eight Kilo-class 636M submarines China imported from Russia (ONI credits it with “similar capability”), the YJ-18 reportedly has a cruise range of as much as 180 km at Mach 0.8 and a terminal sprint range of 40 km at Mach 2.5-3.0. These high-speed, long-range capabilities (not specified directly in ONI’s report, but infer-able from the comparison to the YJ-18’s extremely close Russian equivalent), together with a sea-skimming flight profile and likely possession of a command data link based on Internet photos, could make the YJ-18 extremely difficult to defend against.

China has thus acquired many advanced pieces of hardware, but their integration and effective employment remains a far greater challenge. For instance, weapons of increasing range need over-the-horizon-targeting to strike their targets effectively. Areas that China wants to cover for this purpose are immense. “Just to characterize activities in the ‘near seas,’” for instance, “China must build a picture covering nearly 875,000 square nautical miles (sqnm) of water- and air-space.” The strategically-situated Philippine Sea “expands the battlespace by another 1.5 million sqnm.” Recognizing these challenges, China “has invested in maritime reconnaissance systems at the national and tactical levels, as well as communications systems such as datalinks, to provide targeting information to launch platforms.” In addition to land-based radars, “China operates a growing array of reconnaissance satellites, which allow it to observe maritime activity anywhere on earth.”

For all the progress that ONI documents, it also correctly emphasizes that the PLAN still has considerable work to do to become the world-class blue water navy that its civilian masters desire. In addition to the reconnaissance requirements detailed above, major Far Seas capacity will require substantially more, better nuclear-powered attack submarines (SSNs) than China’s current limited inventory. Since a submarine is useful only to the extent that it can attack undetected, China likely faces an incremental slog: “Following the completion of the improved SHANG SSN, the PLAN will progress to the Type 095 SSN, which may provide a generational improvement in many areas such as quieting and weapon capacity.”

Robust nuclear deterrence is important to any great power, but developing an effective sea leg is most technically challenging in key respects. The U.S. government has long anticipated engagement of the Type 094 nuclear-powered ballistic missile submarine in deterrence patrols with its JL-2 nuclear ballistic missiles, and ONI believes that this could finally be the year.

Finally, the ground forces remain dominant, and jointness elusive. While the ONI report fails to mention it, the ambitious Xi may seek to tackle these problems with sweeping reforms that ultimately render the “Army” merely one of several services and reduce the number of China’s military regions while making two of the coastal ones more maritime and power-projection focused.

While U.S. government reports typically contain valuable data often unavailable elsewhere, their textual presentation sometimes leaves something to be desired. Ambiguous wording and conflicting verb tenses provoke endless speculation—likely wholly unintended—e.g., as to whether a particular system is actually deployed yet or not. Correcting a puzzling multi-year discrepancy in DoD reports, for instance, ONI correctly lists the East Sea Fleet as being headquartered in Ningbo (vice nearby Dinghai).

ONI’s PLAN reports benefit from interpretation, but are sufficiently well-written that they can speak for themselves. The final paragraph of the 2015 edition summarizes China’s sea state and trajectory well:

“…it is evident that the PLAN is a navy in transition. …China is only in the middle of its military modernization, with continued improvements planned over the following decades. As we view the past 20 years of PLAN modernization, the results have been impressive, but at its core the force has remained essentially the same—a force built around destroyers, frigates and conventional submarines. As we look ahead to the coming decade, the introduction of aircraft carriers, ballistic missile submarines, and potentially a large-deck amphibious ship will fundamentally alter how the PLAN operates and its viewed by the world.”