US Marine's Amphibious Assault Vehicles: Upgraded and Ready for War 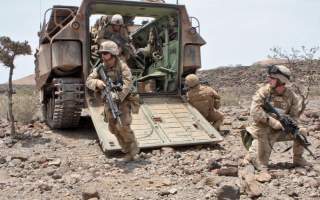 The Marine Corps is revving up its fleet of 1970s-era Amphibious Assault Vehicles to integrate the latest technology and make them better able to stop roadside-bombs and other kinds of enemy attacks, service officials said.

“The purpose of this variant is to bring back survivability and force protection back to the AAV P-variant (existing vehicle),” he said.

The classic AAV, armed with a .50-cal machine gun and 40mm grenade launcher, is being given new technology so that it can serve in the Corps fleet for several more decades.

“The AAV was originally expected to serve for only 20-years when it fielded in 1972. Here we are in 2016. In effect we want to keep these around until 2035,” John Garner, Program Manager for Advanced Amphibious Assault,” said in an interview with Scout Warrior.

The new AAV, called AAV “SU” for survivability upgrade, will be more than 10,000 pounds heavier than its predecessor and include a new suspension able to lift the hull of the vehicle higher off the ground to better safeguard Marines inside from being hit by blast debris. With greater ground clearance, debris from an explosion has to farther travel, therefore lessening the impact upon those hit by the attack.

The AAV SU will be about 70,000 pounds when fully combat loaded, compared to the 58,000-pound weight of the current AAV.

“By increasing the weight you have a secondary and tertiary effects which better protect Marines.  We are also bringing in a new power train, new suspension and new water jets for water mobility,” Rivera said.

A new, stronger transmission for the AAV SU will integrate with a more powerful 625 HP Cummins engine, he added.

The original AAV is engineered to travel five-to-six knots in the water, reach distances up to 12 nautical miles and hit speeds of 45mph on land – a speed designed to allow the vehicle to keep up with an Abrams tank, Corps officials said.

In addition, the new AAV SU will reach an acquisition benchmark called “Milestone C” in the Spring of next year. This will begin paving the way toward full-rate production by 2023, Rivera explained.

The new waterjet will bring more speed to the platform, Rivera added.

“The old legacy water jet comes from a sewage pump. That sewage pump was designed to do sewage and not necessarily project a vehicle through the water. The new waterjet uses an axial flow,” Rivera said.

The new, more flexible blast-mitigating seats are deigned to prevent Marines’ feet from resting directly on the floor in order to prevent them from being injured from an underbelly IED blast.

“It is not just surviving the blast and making sure Marines aren’t killed, we are really focusing on those lower extremities and making sure they are walking away from the actual event,” Rivera said.

The seat is engineered with a measure of elasticity such that it can respond differently, depending on the severity of a blast.

“If it’s a high-intensity blast, the seat will activate in accordance with the blast. Each blast is different. As the blast gets bigger the blast is able to adjust,” Rivera said.

In total, the Marines plan to upgrade roughly one-third of their fleet of more than 900 AAVs.

The idea with Amphibious Assault Vehicles, known for famous historical attacks such as Iwo Jima in WWII (using earlier versions), is to project power from the sea by moving deadly combat forces through the water and up onto land where they can launch attacks, secure a beachhead or reinforce existing land forces.

Often deploying from an Amphibious Assault Ship, AAVs swim alongside Landing Craft Air Cushions which can transport larger numbers of Marines and land war equipment -- such as artillery and battle tanks.

AAVs can also be used for humanitarian missions in places where, for example, ports might be damaged an unable to accommodate larger ships.

Alongside this ongoing effort to modernize the existing fleet of AAVs, the Corps is also constructing a new, wheeled Amphibious Combat Vehicles, or ACVs. These new platforms will include a wide range of next-generation technologies, travel much faster, deploy from much farther distances and perform at a much higher level across the board compared with the existing fleet.