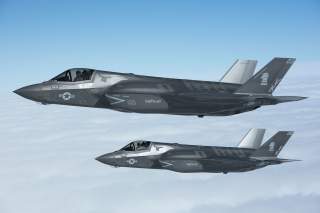 The plan, which the Corps laid out in the 2017 edition of its annual aviation strategy document, has been under consideration for at least five years, according to the document.

Increasing demands on the U.S. Navy’s 10 supercarriers, the entry into service of the aviation-optimized America-class assault ships and the fast-growing numbers of vertical-landing F-35Bs in the Marines’ inventory finally makes the light-carrier scheme feasible … and necessary.

“While the amphibious assault ship will never replace the aircraft carrier, it can be complementary, if employed in imaginative ways,” the strategy document notes.

Normally, a Wasp– or America-class assault ship embarks an air wing composed of six-to-eight AV-8B Harrier jump jets or F-35Bs, up to 10 MV-22 tiltrotors and four CH-53E heavylift helicopters. The Corps believes that by eliminating the CH-53s from the air wing and cutting the number of V-22s to just four, it can boost the F-35 complement to at least 16, and as many as 20.

“An amphibious assault ship … equipped with 16-20 F-35Bs with an embarked, organic aerial refueling capability will create opportunities for the naval and joint force commander,” the strategy document explains. A light carrier loaded up with F-35s could support an amphibious task force, complement a supercarrier or operate independently.

In the summer of 2015, the Marines became the first armed service in the world to bring the F-35 into frontline service. The Corps has accelerated its conversion of F/A-18 squadrons and predicts it will operate 185 F-35Bs by 2025 — a number sufficient to equip every deployed assault ship. Of the nine assault ships in the fleet, seven are normally available for frontline operations.

The light-carrier idea is not unprecedented. The Royal Navy and the navies of Spain, Italy, India and Thailand have all operated aviation vessels roughly the same size as the U.S. Navy’s assault ships, each embarking Harriers as their main air asset. The Americans, too, have experimented with Harrier-heavy air wings. On five occasions, according to the strategy document, Wasp-class assault ships have sailed with extra Harriers.

Most notably, during the 2003 U.S.-led invasion of Iraq, USS Bataan and USS Bonhomme Richard embarked 26 and 22 AV-8Bs, respectively. The vessels functioned much like supercarriers, launching strike sorties at targets ashore — albeit less intensively and with fewer support assets than the supercarrier were capable of doing.

But the Wasp-class vessels lacked the hangar and deck space to comfortably handle two dozen or more Harriers. “Real estate is a premium on the flight deck, and this ship was never designed to carry so many Harriers, but we’ve been able to accommodate them, get the mission accomplished,” Lt. Larry Young, Bataan‘s aircraft handling officer, commented in 2003.

Omitting the well-deck has been controversial, so the Navy decided to restore the well deck beginning with the third America-class vessel, Bougainville. That will leave America and Tripoli as the assault ships best-equipped to embark a large number of F-35s and sustain intensive flight ops. The other vessels will still be able to handle up to 20 stealth fighters — they simply won’t be able to sustain flight ops of the same intensity.

The F-35s won’t operate alone. According to the Marines’ strategy document, assault ships doubling as light carriers will also embark V-22s fitted with extra fuel tanks and reelable hoses for use as aerial tankers. The Marines plan to deploy tanker-capable V-22s beginning in 2018. The tiltrotor tankers will extend the F-35Bs’ range for deep strike missions.

To be clear, just because the Marines are planning to embark up to 20 F-35s on a single assault ship doesn’t mean it necessarily will do so.

“We might never need to employ this way,” the Corps stressed in the strategy document. “But to not lean forward to develop this capability, to train and exercise with it, is to deny ourselves a force multiplier that highlights the agility and opportunity only the Navy-Marine Corps team can provide.”