U.S. Military Battle with Possible Russian Mercenaries: 'Our Strikes Were Done out of Self-Defense' 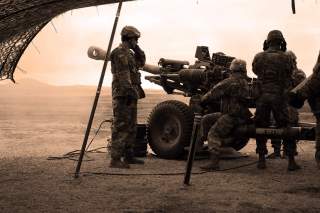 The Pentagon is reiterating that a battle in Syria that allegedly left some number of Russian mercenaries dead was purely an act of self-defense on the part of U.S. forces. Indeed, the Pentagon still does not know exactly who it is that American forces targeted during their retaliatory strike on Feb. 7.

“Our strikes were done out of self-defense,” Pentagon chief spokesperson Dana W. White told reporters on Feb. 22. “We were very clear about that. We saw that group moving towards us. We still don't know, and I won't speculate, about the intentions or the composition of that group.”

White reiterated that the United States did everything it could do ensure that no Russian forces got caught in the crossfire in Syria. “What I can tell you is that we used our deconfliction phone line, and we used it before, during and after the strike,” White said. “And we were assured by the Russians that there were no Russians involved. And so those are all of the details that I have...That was purely out of self-defense.”

The Pentagon statement contradicts a recent Bloomberg report that suggested that the White House would attempt to showcase the recent battle as an example of the Trump Administration’s tough stance on Russia. A source told Bloomberg that the “Trump administration is considering citing the deaths of scores of Russian mercenaries in a Feb. 7 battle with U.S.-backed forces in Syria as evidence of the president’s tough stance toward the Kremlin.”

The Bloomberg report also cited White House Press Secretary Sarah Huckabee Sanders as making an “oblique reference” to the incident in Syria. ““He has done a number of things to put pressure on Russia and to be tough on Russia. Just last week, there was an incident that will be reported in the coming days, and another way that this president was tough on Russia,” Sanders said during a press briefing.

It is unclear exactly who was involved in the Feb. 7 battle and how many Russians actually died. Media reports have diverged wildly from paper to paper and from source to source. The best estimates for Russian mercenary casualties seem to be roughly around 40 dead and 70 wounded. “Those are figures for combined casualties, referencing 3 companies of Wagner involved in support of Syrian forces,” Center for Naval Analyses research scientist Michael Kofman wrote in his personal blog. “Of these the number of PMCs [private military contractors] killed and wounded is probably more than a dozen but doubtfully exceeds 30-40.”

Both the Pentagon and the Russian government are deemphasizing the Feb. 7 incident because a wider conflict that is spiraling out of control does not benefit anyone.