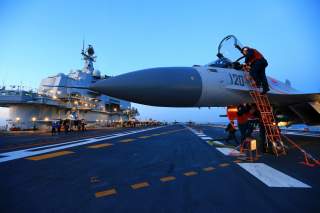 China was identified this week as posing the most significant long-term military challenge to the United States by America’s senior-most military leader, as he set out new US military strategies and policies toward China and Asia more generally in a congressional hearing.

Gen. Joseph Dunford, chairman of the joint chiefs of staff, also revealed in the hearing, before senate, that he had informed China last summer of US plans to use military force against North Korea.

Dunford was asked to rank various military threats and identified nuclear missile-armed North Korea as presenting an “immediate” threat, with Russia and China posing potential dangers based on their growing nuclear arsenals.

“We don’t actually have the luxury of identifying a single threat today, unfortunately, nor, necessarily, to look at it in a linear fashion,” Dunford said.

The four-star Marine Corps general then went on to say that, over the longer term, China represents the most significant danger, overshadowing the nuclear and cyber power of Moscow.

“If I look out to 2025, and I look at the demographics and the economic situation, I think China probably poses the greatest threat to our nation by about 2025, and that’s consistent with much of our analysis,” Dunford said.

The comments echoed those of CIA Director Mike Pompeo, who said in July that he believes China is the most significant regional security threat. “I think China has the capacity to present the greatest rivalry to America… over the medium and long term,” he said.

The Chinese military buildup of missiles, warships, submarines and aircraft, along with cyber-warfare and other non-kinetic tools of warfare, is aimed at limiting the United States’ ability to project power and also to weaken American alliances in the Pacific.

China has closely studied US warfare weapons and tactics and has developed both arms and strategies that will enable its weaker forces to defeat US military forces in a future conflict, he said, adding that the gap has been closed between the two militaries over the last decade and a half.

Dunford outlined how the military is backstopping President Donald Trump’s attempts to press the North Korean regime of Kim Jong-un to give up its nuclear arms.

Government analysts put forth the pessimistic view that Kim will not give up his nuclear and missile arsenal because those weapons are inextricably linked to his survival. The analysts also assessed that China will not co-operate with the United States in seeking Korean Peninsula denuclearization.

Dunford said US Secretary of State Rex Tillerson is testing both assumptions, realizing that the alternatives – a second Korean war – are extremey dire.

“We’re at the phase now where implementation of the sanctions is going to determine whether or not we have a peaceful solution to denuclearization on the peninsula,” Dunford said.

Military options have been drawn up and placed before Trump for consideration if the campaign of economic and diplomatic pressure fails.

Dunford said he had traveled to China in August and delivered that stark message to the Chinese, which has a defense alliance with North Korea.

The chairman also disclosed that Pacific forces had adopted a new policy toward American warship passage near disputed Asian islands claimed by China.

In February, US Defense Secretary Jim Mattis rejected the military’s piecemeal approach to freedom of navigation, which depended on approval through a bureaucratic process that limited passage.

The new Mattis policy was described by Dunford as a “full strategy that lays this thing out now for a long period of time and talks about the strategic effect we’re trying to achieve.”

The new policy will include regional allies in freedom of navigation operations and will become “routine and regular.”

Three American warship drills have been carried out so far this year, drawing the ire of China, which declared each to be a violation of Chinese sovereignty. Chinese warships shadowed the US destroyers during the activities.

“That’s what we’re implementing right now, a strategic approach to freedom of navigation operations that does in fact support our overall strategy in the Pacific, as well as the specific mission, which is, to ensure that we fly, sail and operate wherever international law allows,” Gen. Dunford said. “And we continue to validate those claims where we see international airspace for that matter, or the maritime domain.”

“When we fielded the current space capabilities, we didn’t field them with resilience to the current threat in mind,” he said.

The 500 US satellites that are strategic assets – used in both military and civilian communications and navigation, as well as intelligence and weapons-guiding – are vulnerable to attack from the Chinese, as well as by anti-satellite weapons being developed by Russia and North Korea.

To counter these threats, the US military is bolstering space defenses by building replacement satellites and improving launch capabilities. Commercial satellites also may be used to back up defense intelligence satellites.

On the US pivot to Asia launched by two previous American administrations, Dunford said the shift in focus toward Asia and the movement of forces is continuing.

Steps include positioning advanced warships, aircraft and drones to the region and bolstering nuclear deterrence in a bid to reassure regional allies.

In written policy statements to the Senate Armed Services Committee, to which Dunford testified on September 26, the chairman also noted China’s willingness to use economic leverage to advance the Communist Party of China’s political objectives in the region.

“As China’s military modernization continues, the United States and its allies and partners will continue to be challenged to balance China’s influence,” he stated.

The key to backing allies and limiting Chinese regional hegemony will be sustaining the US military presence and strengthening regional security partnerships “to help allies and partners stand up to Chinese coercive behavior,” he stated, adding that the military is unilaterally continuing to build capabilities aimed at countering Beijing’s improving military forces.