U.S. Military Helicopters Will Soon Be Able to Blast Missiles out of the Sky 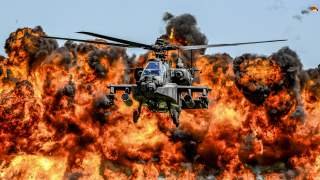 BAE Systems is working to address an Army need by testing an emerging helicopter protection technology able to detect, distinguish and destroy approaching enemy fire in a more effective and integrated fashion than existing systems can, industry developers explained.

As a way to respond to and anticipate evolving Army requirements, BAE is engineering and testing a 3-Dimensional Advanced Warning System, or 3DAWS, which integrates ultraviolet sensor technology from the Common Missile Warning System, or CMWS, with an RF-Tracker to discern whether an approaching object is, in fact, an enemy threat, BAE Developers said. CMWS sends out a flare to divert enemy fire off course, and the RF-Tracker uses radio frequency to precisely assess the nature of a particular threat.

“This detects threats in a first-encounter scenario. We want our missile warning system to see everything that can possibly be a threat to them - we want to confirm that something is a threat before it can harm the aircraft,” Cheryl Paradis, Director of Threat Management Solutions, BAE Systems, told Scout Warrior in an interview.

Using a passive missile warning system and semi-active radar from a helicopter as an adjunct to CMWS, 3DAWS aims to provide identification, tracking and cueing for helicopters in high-threat areas.

Traveling at the speed of light, electromagnetic radar signals, or “pings,” are sent forward to bounce off an approaching enemy object; the return signal is then analyzed as a way to determine the shape, size, distance and speed of an approaching threat. Since the speed of light is a known entity -- and the time of travel of the signals is also quantifiable -- a computer algorithm is then able to quickly determine the distance of an object. The semi-active radar used by 3DAWS’ 3D-Tracker uses this technology to assess the precise nature and distance of enemy fire as part of an effort to give helicopter crews timely information about incoming attacks.

For instance, the new system seeks to identify and help intercept or destroy high-threat attacks such as enemy RPGs, MANPADS -- or heat-seeking shoulder-fired weapons – and various kinds of rockets and missiles. Pentagon threat-assessment analysts have consistently expressed concern about the expanding proliferation and improving targeting technology of shoulder-fired weapons.

In order to minimize vulnerability to enemy RPG fire, Army helicopters often fly lower to the ground as a way to decrease the possible angle of attack. Varying speed and route selection is another method of limiting risk. Increased speed, in and of itself, is a substantial survivability-enhancing component. This is one reason the Army’s Future Vertical Lift program seeks to construct a compound-helicopter technology able to reach unprecedented airplane-like speed and range, all while maintaining the helicopter-specific ability to hover. The Army has detailed a range of requirements for its Future Vertical Lift program, an effort aimed at fielding a next-generation aircraft by the 2030s.

As a result, knowing the speed, range and characteristics of an approaching threat, from further distances, makes 3DAWS a significant option for Army developers.

The goal is for 3DAWS to provide a seamless hand-off to a soft or hard-kill countermeasure as appropriate to the threat, Paradis explained.

“We will have an ability to detect a threat that has never been encountered before – and then cue and dispense a number of countermeasures,” Paradis added.

Ultraviolet sensors on CMWS detect activity all the way around the aircraft looking for threat signatures. CMWS is now deployed on virtually all Army helicopters such as Black Hawks, Chinooks and Apaches.

“We have an upgrade to CMWS to add a two-color IR sensor and passively cued 3D tracker – a 3-Dimensional warning system finds the azimuth and elevation of the threat to determine how far away the threat is – and whether it is a threat or not,” Paradis explained.

The Army has long been interested in developing multifaceted helicopter survivability systems using advanced computer algorithms to condense multiple applications into a single, lighter-weight and more effective suite of countermeasures connected by a common processor.

“CMWS cues the tracker to verify whether the object or approaching track is a threat or not. 3DAWS is these two components working hand-in-hand together,” Paradis said.

For years now, the Army has been working on computer algorithms able to combine input from a range of different aircraft technologies including CMWS and various now-in-development technologies, such as the Hostile Fire Detection System and the Common Infrared Countermeasure system, or CIRCM.

“We are building this internally until the Army is ready to put a solution on the table - so we can be ready,” said Chris Austin, Program Director for Threat Management Solutions, BAE Systems.

Army developers have said a combined helicopter survivability system, using a common display, would weigh less than multiple systems and reduce aircraft weight. Such a system would also consume less power on the aircraft.

The CIRCM system is an improved, lighter-weight version of a BAE Systems-built Advanced Threat Infrared Countermeasures (ATIRCM) -- a high-tech laser jammer that is able to thwart guided-missile attacks on helicopters by using an infrared sensor designed to track an approaching missile. Like CMWS, ATIRCM is also widely deployed across the US Army helicopter fleet.

The system fires a multiband heat laser to intercept the missile and throw it off course, Army developers explained.

The CIRCM program, planned as a multi-service survivability solution for rotary-wing aircraft, aims to improve on and capture lessons learned from the now-fielded ATIRCM technology.

ATIRCM is fielded now on helicopters across Iraq and Afghanistan. CIRCM, its replacement, lowers the weight of the system and therefore brings with it the opportunity to deploy this kind of laser countermeasure across a wider portion of the fleet.

CIRCM is intended to give the rotary wing fleet a capability to defeat IR missiles that they don't have currently. Army developers say CIRCM has a laser emitter as part of the turret -- guided by an IR pointer.

“This points the laser on the IR seeker of the inbound missile. Shooting the laser into the IR seeker essentially blinds the missile," a statement from an Army official said.

HFDS works with the UV sensor in the CMWS systems and adds an algorithm into the process which enables it to differentiate tracer fire from a missile launch.

The technology integrates software into a processor for CMWS, giving it the ability to detect tracer fire and other threats.

Another small-arms defensive measure to protect helicopters that the Army has worked on in recent years is called Ground Fire Acquisition System, or GFAS.

While attack helicopters such as the Apache are built to withstand a certain amount of small-arms fire, GFAS gives pilot crews an ability to quickly locate the source of incoming enemy fire – enabling them to attack enemies faster.

Infrared sensors built into the GFAS system detect muzzle flashes from the ground, allowing Apache pilots to get their sensors on potential targets and immediately know the location, and distance of ground fire, Army officials said.

The cameras on the aircraft detect the muzzle flash from ground fire - and move the information through an Aircraft Gateway Processor into the cockpit so pilots see an icon on their display screen, Army technology developers explained.

GFAS has previously been integrated into the 1-101 Aviation unit out of Fort Campbell, Ky.

Upon receiving the information about the ground fire on their display screens, the aircraft crew can move their Modernized Target Acquisition Designation Sight/Pilot Night Vision Sensors, or MTADS/PNVS, onto the target at the touch of a button, an Army statement said.

GFAS has undergone a range of key tests at places such as Mesa Ariz., and Yuma Proving Ground, Ariz., service officials said.

This article by Kris Osborn originally appeared on Scout Warrior.