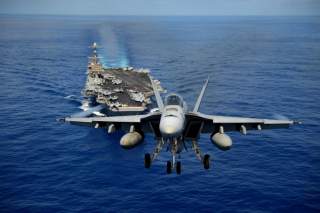 The U.S. Navy’s strike fighter squadrons are in dire straits with only one out of three Boeing F/A-18 Hornet airframes being ready for war at any given time. In order to meet its operational requirements, the service is routinely raiding squadrons that are not deployed to secure enough jets for the air wings at are about to go to sea.

“If I have to ensure that I have ten like strike fighters are in a single squadron on that aircraft carrier and they need the same capability, I will tax units that are back here at home,” Adm. Philip Davidson, commander of U.S. Fleet Forces Command testified before the House Armed Services Committee on May 26. “If I need ten forward, I do routinely operate four aircraft in squadrons in the rear.”

Within the Navy, only one out of four Hornets is fully mission capable. “That one in four is currently deployed,” Capt. Randy Stearns, Commodore of Strike Fighter Wing Atlantic told the committee. “The other three in four are the aircraft that are back in the maintenance phase or going through another FRP [fleet response plan].”

The Navy currently has four air wings that are ready for war, but it has no ability to surge any additional forces. In previous years, it would have taken the Navy about 90 days to ready another air wing for deployment—now it takes roughly three times as long. If tasked to surge another air wing, Stearns said that it would take between six months and a year to gather enough aircraft and pilots to get another air wing ready for war.  “There is no chance of getting those ready,” Stearns said. “There is nothing to pull from in the back, we’ve already put everything forward. There’s nothing left.”

Though cannibalization of operational Hornets is a last resort, such measures are now routine throughout the fleet, Stearns said. And its not just the legacy A through D model Hornets, the newer, more capable Super Hornets have also been suffering from a lack of spare spares over the last three years due to automatic sequestration budget cuts. “We’ve never caught up,” Stearns said.

Part of the problem was caused by repeated delays to the Lockheed Martin F-35C Joint Strike Fighter—but also wartime usage of the Hornet fleet, Stearns said. As a result, the service has a backlog in its depots of older Hornets because those facilities were never intended to extend the life of the F/A-18 airframe past 6000 hours. The service is now flying those older aircraft—of which the service has five remaining squadrons—out to 10,000 hours, far longer than anticipated.

Moreover, the Navy—because of the F-35C’s continual delays—was forced to transition additional squadrons onto the Super Hornet by raiding its attrition reserves. “We’ve transitioned about 10 squadrons of Super Hornets unexpectedly to get out of legacy and also to meet the gap for the JSF just to meet operational demands,” Stearns said. “So now we’re taxing hours and utilization on our attrition aircraft.”

The Navy needs more aircraft to either come off the Boeing production line or to come out of depot overhaul. But it’s not even just the deployed forces; the Navy cannot shortchange its fleet replacement squadrons—its “seed-corn”—that trains new aviators to fly the Hornet. “We’re chewing up about 40 aircraft worth of hours a month and if we’re not buying that much or putting that much through the depot – we’re falling behind,” Stearns said.

The lack of fully combat-capable Hornets—both classic and Super—is damaging the Navy’s overall readiness and training. Indeed, the situation is so bad that the Navy will be forced to reduce the flying hours for one of its non-deployed air wings (CVW-1) to zero to make up for the shortfall—and save money. In other words—the Navy will shut down an entire air wing for four months.

However, the proposal—if enacted—will have a devastating readiness impact on that air wing and its pilots and maintainers. “Never going to get those hours back,” Stearns said—noting there are knock-on impacts to overall fleet readiness that will occur as result of such a “cold iron” shutdown.

But while naval aviation seems to be on the verge of collapse—the Navy’s surface ships and submarines are not doing much better. Indeed, even the newest and most capable Navy warships are being cannibalized so that other vessels can put to sea. Effectively, the Navy is facing what can only be described as a readiness disaster.