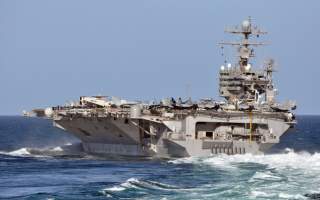 The Office of Naval Research is working on 12-month, $53-million deal with Northrop Grumman to develop a Laser Weapon System Demonstrator through three phases; the phases include an initial design phase, ground-testing phase and then weapons testing at sea aboard a Navy Self Defense test ship, a Northrop statement said.

“The company will design, produce, integrate, and support the shipboard testing of a 150-kilowatt-class solid state (electric) laser weapon system,” the Northrop statement added. “The contract could grow to a total value of $91 million over 34 months if ONR exercises all of its contract options.”

“It is way too early to determine if this system will ever become operational. Northrop Grumman has been funded to set-up a demo to "demonstrate" the capabilities to senior leadership, who will then determine whether it is an asset worth further funding and turning into a program of record,” a Navy official told Scout Warrior.

Meanwhile, the Navy has already deployed one laser system, called the Laser Weapons System, or LaWS, which has been operational for months.