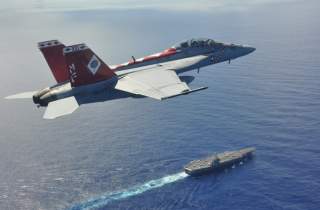 The Maverick air-to-ground missile, in service since the Vietnam era, is now receiving an upgraded laser-seeker along with new software configurations to better enable it to hit targets on the run.

The upgraded weapon is currently configured to fire from an Air Force F-16 and A-10 and Navy Harrier Jets and F/A-18s.

The LMAV E2 upgrade program has been implemented as a seeker and sustainment upgrade, she added. The Air Force is currently attacking ISIS with the upgraded Maverick through a prior deal to receive 256 missiles from its maker, Raytheon.

Also, there is an existing laser-guided version of the Maverick already in use; the new variant involves a substantial improvement in the weapon’s guidance and targeting systems.

The AGM-65E2, as it’s called, will be used to attack ISIS as part of the ongoing Operation Inherent Resolve, Navy officials said.  Such a technology is of particular relevance against ISIS because the ongoing U.S. Coalition air bombing has made it virtually impossible for ISIS to gather in large formations, use convoys of armored vehicles or mass large numbers of fighters.

As a result, their combat tactics are now largely restricted to movement in small groups such as pick-up trucks or groups of fighters deliberately blended in with civilians. This kind of tactical circumstance, without question, underscores the need for precision weaponry from the air – weapons which can destroy maneuvering and fast-moving targets.

The Navy is now in the process of receiving 566 upgraded Maverick ER weapons from a 2014, $50 million contract with Raytheon.

The Maverick uses Semi-Active Laser, or SAL, guidance to follow a laser “spot” or designation from an aircraft itself, a nearby aircraft or ground asset to paint the target.

The weapon can also use infrared and electro-optical or EO guidance to attack target. It can use a point detonation fuse designed to explode upon impact or a delayed fuse allowing the missile to penetrate a structure before detonating as a way to maximize its lethal impact. It uses a 300-pound “blast-frag” warhead engineered to explode shrapnel and metal fragments in all directions near or on a designated target.

“It uses a blast but not quite as large as a 500-pound bomb for lower collateral damage,” Gordon McKenzie, Maverick business development manager, Raytheon, told Scout Warrior in an interview.

Also, In the event of a loss of LASER lock, the upgraded missiles are able to de-arm & fly towards last seen laser spot; and will re-arm & guide to target with laser reacquisition.

In addition to its role against ground targets such as ISIS, the Maverick weapon able to hit maneuvering targets at sea such as small attack boats.

“It has a rocket on it versus being a free-fall weapon. It travels faster and has maneuverability to follow a laser spot on a fast-moving pick-up truck,” McKenzie explained.