U.S. Navy 'Fires' Back: A New Strategy to Take on Deadly Challenges 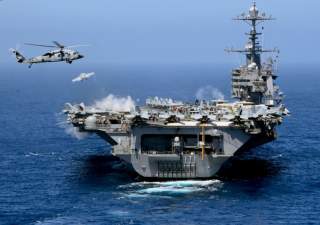 Naval strategy is in the news: Cooperative Strategy 21 (CS-21R) was released in April; the surface warfare community is discussing its supporting strategy,  ‘Distributed Lethality;’ the Secretary of the Navy released his Navy’s Innovation Vision and the HASC  Subcommittee on Seapower and Force Projection has been active with hearings and testimony from strategists.

It is clear the U.S. Navy has identified serious threats to its post-Cold War operating concepts and is altering its strategies and capabilities to adjust to adaptable future adversaries. This adjustment might be summarized in three imperatives: (1) spread out and increase the adversary’s risk, (2) embrace scalability, and (3) clarify difficult tradeoffs with strategic intent.

Spread Out and Increase the Adversary’s Risk. One of the key additions within CS-21R is the concern of anti-access and area denial (A2/AD) strategies, pursued by China, Iran, and North Korea, and others. In response, CS-21R adds an additional essential naval function, “all domain access.”

When the Cold War ended the U.S. military possessed undisputed dominance as the sole superpower. Without a peer competitor, the U.S. Navy increasingly concentrated its offensive strike capability in the aircraft carrier and built a battlegroup of destroyers, cruisers, and submarines into a ring of steel to defend the carrier.   This concentration of naval power defied a century’s long trend of the ever-thinning battlefield.  From the Napoleonic Wars through World War I, the battlefield was packed shoulder to shoulder; battles at sea were relatively compact as well. As weapons range, accuracy, and lethality continued to increase, the battlefield became more distributed with less platforms and people across a larger and larger area.

The current relatively tightly packed carrier battle group offers a single, paramount target—the aircraft carrier— to a massive barrage of large, accurate long-distance weapons. Conversely, distributed lethality responds to the A2/AD threat by spreading the U.S. navy’s offensive strike capability to a broad array of ships across a larger area of the ocean. The objective is to create a more lethal, mobile, and innovatively employed surface force that is less predictable and more disaggregated. This makes it more difficult for the enemy by increasing the enemy ISR challenge and dispersing enemy weapons focus—they have to look harder and longer and have to engage more targets.

On the innovation front, the U.S. Navy is successfully testing ship-to-ship missiles with dramatically increased range and is discussing how to put offensive capability on every class of ship, including amphibious and support ships.  This would make it exponentially more difficult for the enemy to target the U.S. Navy’s offensive strike capability—if and when it is no longer primarily concentrated on the aircraft carrier.  Attack submarines and yet-to-be developed autonomous undersea weapons systems also put the enemy at greater risk and disperse the navy’s offensive capability. When fielded, the laser weapons system and the electromagnetic rail gun will further increase the U.S. Navy’s weapons capability.

Embrace Scalability. Scalability includes the capacity to engage across the spectrum of conflict in an operationally appropriate and fiscally responsible manner. In the mid-1970s then-Chie fof Naval Operations  (CNO) Admiral Elmo Zumwalt pursued a high-low mix of capability. It was clear a fleet of only expensive, high-end ships would unreasonably limit the size of the fleet. Numbers matter, as evidenced by the U.S. Navy’s current dwindling fleet (down from nearly 600 ships to 289) and the growing challenge to be in the right place at the right time.  However, a large, low-end navy would be unable to conduct high-end missions against peer competitors.

What is painfully apparent today is that high-end weapons and platforms are prohibitively costly when used for lower-end conflicts.  The cost per smart bomb or missile, the hourly operating cost of advanced ships and planes, and the maintenance cost of these exquisite war machines have made fighting low-tech adversaries exceedingly costly.

As an example, the seven-month bombing campaign supporting the intervention in Libya in 2011 cost an estimated $1 billion dollars. Eleven ships of the line, including two destroyers (DDG), two attack submarines (SSN), and one ballistic missile submarine (SSBN) bombarded advanced weapons on Libya’s limited military capability at great expense. There was not, and still is not, a viable low-end capability to provide an alternative.  While it might be true that the F-35 can provide satisfactory air support to ground troops, it is also true that the A-10,Super Tucano, or the Scorpion and the smaller, cheaper weapons deployed from them can do the mission at a fraction of the total cost.

Current CNO Admiral Jon Greenert is pursuing a high-low mix of capability with the Mobile Landing Platform (MLP), the Joint High Speed Vessel (JHSV), the Afloat Staging Base (AFSB – USS Ponce), and the Littoral Combat Ship/Fast Frigate (LCS/FF). These lower-end platforms match the missions, size, and capabilities of our regional naval partners, central to Cooperative Strategy 21 (CS-21R). They can provide support to USMC and Special Operations Forces without dedicating limited amphibious assault ships, relieving high-end capital ships from being committed to smaller scale contingencies.  This not only reduces the cost of small wars but also allows these expensive platforms to focus on near-peer competitors and regional deterrence.   On the innovation front, these low-end platforms can act as mother ships to yet-to-be developed unattended surface and subsurface platforms that could significantly expand the distributed lethality concept.

An example of affordable scalability is the America class-Landing Helicopter Assault (LHA) seaframe when outfitted with the F-35 strike aircraft. While the newest LHA and the F-35 are not cheap, they will offer an impressive offensive strike capability at a significantly lower cost than supercarriers. The America-class “mini-carrier” is not a replacement for the supercarrier but, it would relieve a large carrier from lower-end contingencies and expand distributed lethality.

This high-low mix also contributes to tailored response to hybrid warfare, a combination of regular and irregular coercive tools used in an incremental approach to remain below a threshold of intervention from the U.S. or our allies.  Russia is pursuing hybrid warfare in the Ukraine while China is applying hybrid warfare in the South China Sea.  This incremental approach achieves two objectives: (1) it creates uncertainty so that responses are slow, delayed, and hesitant and (2) it puts the opponent of a hybrid warfare adversary in a difficult position—those who seek to resist a gradualist approach can appear to establish unjustified red-lines and can be accused of over-reaction and dangerous escalation.

A high-low mix would allow the U.S. to respond across the spectrum of conflict while avoiding this perception of over-reaction or putting high-end platforms at risk to Russian or Chinese rapid escalation strategies designed to deter intervention, an integral part of their hybrid strategy. Just as in Admiral Zumwalt’s design, low-end platforms would engage in peacetime, low-end contingency, and ambiguous situations, while high-end platforms would be available to deter or fight and defeat a peer adversary.

On the innovation front, the modular, mission package concept developed for the Littoral Combat Ship can be applied across the spectrum of low-end platforms.  There are sixty non-combatant support and logistics ships including Mobile Landing Platform (ML), Joint High-Speed Vessel (JHSV), Afloat Forward Staging Base (AFSB), and twenty-six Military Sealift Command preposition ships. The modular mission package concept can be expanded and adapted to a broader range of ships and missions, including Humanitarian Assistance and Disaster Relief (HA/DR), medical assistance, ISR, electronic warfare, surface security (counter-piracy), mine warfare, and partner training and support.

Clarify Difficult Tradeoffs with Strategic Intent.  Difficult and risk-laden trade-offs are required. Naval strategy—CS-21R, Distributed Lethality, Navy’s Innovation Vision, and a net assessment of threats and opportunities—should guide these decisions.  Some tasks need more specialization and focus, administrative overhead needs to be prudently reduced, and some missions need to be curtailed or shared by others to focus on strategic payoffs.  All of this entails risk; clarifying the risks and gains of these trade-offs is critical.

Without a major adversarial threat at sea, the post-Cold War navy has accumulated new and varied tasks, roles, and functions.  These additions, while justified individually, have cumulatively reduced focus on core functions and diluted critical expertise.  For example, the U.S. Navy conducts visit, board, search, and seizure (VBSS) operations with ships’ crew members.  This is a necessary mission, but the assignment of this function should be reviewed.

The current method requires the ship’s crew to receive minimal but time-consuming training in small arms and small unit tactics to the detriment to their core responsibility (e.g. proficiently operating sonar equipment to find enemy submarines). Assigning this mission to an attached element from the Naval Expeditionary Combat Command (NECC) or the U.S. Marine Corps would provide a much improved, professional, and tailored capability for VBSS while allowing ship’s crew to focus on the warfighting skills of their primary job.

As another example, the surface fleet has aggressively worked to reduce administrative overhead that has accumulated over decades. With each negative event within a staffing process, layers of oversight and additional checks and balances have been implemented. Again, individually this made sense, but cumulatively it added significant time and manpower to routine tasks, slowing productivity and consuming energy and opportunity costs. The surface fleet—implementing the CNO’s guidance to focus on warfighting— has eliminated or streamlined 149 processes or administrative requirements to provide increased time to training in warfighting skills.

Ballistic Missile Defense (BMD) is another area where adjusting roles and functions would allow the U.S. Navy to focus more aggressively on all-domain access.  In 2005, no Navy ships were assigned a BMD mission. Because of the noteworthy capabilities of the Aegis destroyers and cruisers, today, eighteen ships support BMD. Moving a significantly larger portion of this mission to shore based locations (Aegis Ashore) would dramatically reduce the cost of BMD; Aegis Ashore costs $750 million per capability while an Aegis Destroyer costs $1.6 to $1.9 billion. This would also allow destroyers and cruisers to focus on offensive all-domain access rather than geographically restrictive defensive missions.  This contributes to distributed lethality and increases the conventional deterrence for those who are pursuing A2/AD strategies against the United States.

The U.S. Navy is on the right course, but many adjustments are required to deter and defeat adaptable future enemies, including non-state violent extremists, rouge nations, and peer-competitors.  However, the U.S. Navy’s innovation efforts, its pursuit of a balanced high-low mix of capabilities, and its focus on warfighting are operationalizing the new strategy. The strategy is not fluff: actions and spending are linked to the words.