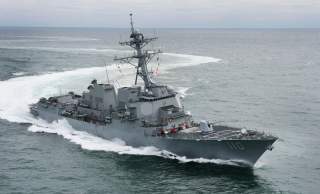 The US Navy has carried out another freedom of navigation operation in the South China Sea. According to defence sources, it was conducted, on the morning of 10 May, by the USS William P. Lawrence, a guided missile destroyer within 12 nautical miles of Fiery Cross Reef in the Spratly Islands.

The Reef is a high-tide feature occupied by China and extensively built up since 2013. It is also claimed by the Philippines, Taiwan, and Vietnam.

In keeping with the two previous US FONOPs in the South China Sea in October 2015 and January 2016, the US chose to exercise the right of innocent passage, without prior notification, transiting inside 12 nautical miles of the feature.

It is important to stress that no country, including China, has declared baselines or territorial seas within the Spratlys. However, Fiery Cross Reef, as a naturally drying feature prior to China’s construction efforts, would be legally entitled to a 12 nautical mile territorial sea.

As with the previous South China Sea FONOPs the US has again made a point of challenging excessive maritime claims by multiple countries, in this case China, Taiwan, and Vietnam, based on these states’ requirements for prior permission or notification of transits through the territorial sea, a position that the US holds as contrary to international law. FONOPs are not designed to challenge territorial claims to land features, such as Fiery Cross Reef.

Fiery Cross is one of the largest complexes built by China in the Spratlys and can be considered a lynchpin facility, with a 3000 metre runway that is now operational and capable of handling any military aircraft in China’s inventory. Despite President Xi Jinping’s apparent pledge in Washington not to militarise the Spratlys, Fiery Cross has already been visited in recent weeks by China’s top-ranking general and last week hosted a visiting naval contingent led by a large Type 071 amphibious ship, and even a troupe of singers.

The US was reported to have cancelled a FONOP last month, as US-China tensions have shifted to Scarborough Shoal, an isolated high-tide feature to the north of the Spratlys and close to the Philippines, where there are fears that China intends to undertake another large-scale island construction for strategic reasons. The US approach on Scarborough Shoal has received praise in some quarters, for representing a more effective mix of deterrence and conflict management than it has exhibited previously.

However, the resort to a third freedom of navigation operation in the Spratlys is unlikely to stem internal criticism of the Obama Administration’s approach, including its preference for the least assertive form of surface FONOP.