U.S. Navy Plan for 355 Ships (Including More Aircraft Carriers and Submarines) Is "Executable" 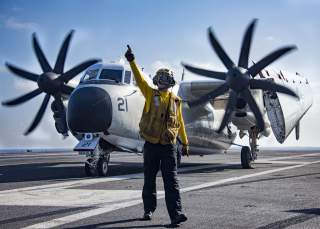 Navy officials say a recently determined plan to increase its fleet size by adding more new submarines, carriers and destroyers is - “executable” – and that early conceptual work toward this end is already underway.

A completed “Force Structure Assessment” underscores what Navy leaders have been saying for quite some time - - that the current fleet size is insufficient to meet global demands from combatant commanders.

The assessment could likely mean more carriers, submarines, destroyers and amphibious assault ships, among other things.

The Navy assessment for 2018 calls for a sizeable jump up to 355 ships, including 12 carriers, 104 large surface combatants and 66 attack submarines. In the meantime, the services’ near term 2017 proposed fleet size seeks to increase the current 274-ship fleet up to 308.

Although various benchmarks will need to be reached in order for this new plan to come to fruition, such as Congressional budget allocations, Navy officials do tell Scout Warrior that the service is already working – at least in concept – on plans to vastly enlarge the fleet.  Findings from this study are expected to inform an upcoming 2018 Navy Shipbuilding Plan, service officials said.

“274 ships. We undoubtedly do not have enough Navy to meet the demand,” Adm. Bill Moran, Vice Chief of Naval Operations, said recently at the Surface Naval Association symposium.

The new fleet is an emerging element of the Navy’s “Distributed Lethality” strategy which, among other things, seeks to better arm the fleet with offensive and defensive weapons.

“Our ability to protect the homeland, strategic interests, and national values around the world are no longer without major competition. From non-state actors operating with high-end weapons –- think Mason and Nitze in the Bab El-Mendab recently -- to growing regional threats and higher-end adversaries in the world in which we operate has changed extensively since 2012,” Moran added.

A need for a substantial fleet increase, endorsed by President Trump on the campaign trail, is entirely consistent with the existing Navy strategy.

Following more than a decade of land wars during which the serve was concentrated upon counterterrorism, counterpiracy and Visit Board Search and Seizure operations, the Navy’s approach in recent years is to better prepare the services’ “open” or “blue water” combat abilities. Naturally, this need stands in clear parallel to the technological emergence and aggressive tactics of both Russia and.

While Moran did not specifically cite Russia and China, growing Navy and Pentagon concern about their behavior is often cited by senior leaders. He did, however make a specific reference to the South China Sea in an unambiguous reference to Chinese actions in the area. In fact, a 2014 Congressional report estimated that China's Navy is on track to be larger than the US Navy by the mid-2020s In addition, he cited recent provocations of Navy ships by Iranian vessels in the Arabian Sea.

“I’ve got to tell you once again, our CO, the crews, are making great smart judgments [and decisions]. And we’re not seeing escalation. I’ve got to hand that to the leadership and the training that’s going on out there. But we’re really proud of what we’re seeing,” Moran said.

With a new Congress and administration, senior Navy leaders have cited hope that the defense-budget pressuring “sequestration” may come to an end.

Part of the apparent reason for the planned increase is the well-known challenges for the Navy regarding the previously determined plans for submarines and surface vessels.

The chart--which you can see here--was released by the Navy as an essential summary of the Force Structure Assessment, detailing the jump in planned size from 2014 to 2016.

The chart clearly calls for a substantial increase in fleet size, to include major jumps in Large Surface Combatants and Attack Submarines. Last year, the prior Director of Undersea Warfare told Scout Warrior that internal Navy analysis found that the service and industry “would” be able to accommodate increasing the pace of attack submarine production to address the anticipated shortfall. This proposed fleet size, increasing the number of Attack Submarines from 48 to 66, seems to reflect this position.

According to previous Navy plans, attack submarine fleet was slated drop from 53 in 2016 down to 41 by 2029. This is one reason, among many, that the service has recently requested that it be allowed to increase production of Virginia-Class attack submarines in coming years.

While Navy officials did not elaborate on some of the various methods used to arrive and their conclusions, it is indeed reasonable to assume their calculations included a throughout assessment of industrial base ship and submarine-building production capability. Naturally, the hope would be that industry would have the ability to handle a substantial increase in shipbuilding.

Another problem with the previously determined ship-building trajectory is that, while the service plans to have 97 Large Surface Combatants in 2022 – the number drops all the way down to 82 by 2045, according to the previously released Navy shipbuilding plan.

During the Reagan years, the Navy grew to more than 500 ships, nearly double the services’ current fleet size which is approximately 285 ships.

A close look at the Navy’s previous shipbuilding plan showed the service will decommission more ships in the next five years than it will commission. This is happening, in part, because some of the many ships added during the Reagan build-up, such as the Los Angeles-class submarines and Aegis cruisers, are slated to retire, analysts have said.

Many lawmakers and analysts have consistently called for a signifcantly larger Navy, citing the Cold War naval posture.

However, proponents of a smaller Navy consistently made the point that today's ships are far more capable and technologically advanced compared to those of decades ago, precluding the need to match the Reagan-era in terms of sheer size.

Nonetheless, service officials do say the current threat environment, as determined by combatant commanders, service analysts and senior leaders, is such that the service will likely seek an increase above the current plan to hit 355 ships.

One would expect that the yet-to-be-released Navy long-term Shipbuilding Plan will likely be quite different.

Some of these concerns were also address as far back as 2010, when an independent panel of experts examined the 2009 Quadrennial Defense Review and told the Senate Armed Services Committee that, given the range of anticipated threats, a 346-ship Navy was their recommendation.

Indeed, challenges cited in 2010 indeed continued to get greater as Navy combatant Commanders consistently report an inability to meet request due to a limited amount of assets.

The Force Structure Assessment also calls for an increase in the amphib fleet from 34 up to 38. Navy and Marine Corps officials explain that the greater use of amphibious assault ships is likely as the Marine Corps continues to shift toward more sea-based operations from its land-based focus during the wars in Iraq and Afghanistan. At one point, the previous Marine Corp Commandant told Congress that it would likely take as many as 50 amphibious assault ships to fully accommodate commanders’ worldwide need for amphibs.

Senior Navy leaders have told Scout Warrior that the Navy plans to reach 38 by the late 2020s, a number well short of the 50 needed to complete current operations.

Former Congressman - Rep. Randy Forbes, R-Va., Chairman of the HASC Seapower and Projection Forces Subcommittee – was among a group of Congressional Republicans calling for a larger Nay Fleet during the previous administration.  Among other things, he said that the Navy was able to meet 90-percent of the combatant commander's requirements in 2007, a number which wound up dropping to nearly half in future years.

Forbes, who has previously authored several op-eds recently about the growing importance of seapower and force projection in coming decades, was concerned that there may be a budget shortfall when it comes to allocating funds needed for shipbuilding.

In a special written statement to Scout Warrior last year, Forbes called the Navy's interest in a larger fleet a "welcome" development – at that time.

He cited the findings of the 2010 independent panel: