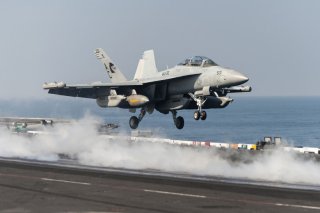 The U.S. Navy is set to release a new request for information (RFI)  to industry for the next increment of the Next Generation Jammer (NGJ). According to Naval Air Systems Command program manager Capt. John Bailey, this second NGJ increment will focus on countering the ever growing threat from low frequency radars.

“We’ll put out some initial baseline requirements as we see it for increment two for low band and request information from industry,” Bailey said during an interview with The National Interest at the Navy League Sea, Air and Space symposium in Maryland. "Probably over the next month or so."

The Navy focused the initial increment of the Next Generation Jammer on the mid-band threat where most fire control radars operate because that is the most prolific immediate threat, Bailey said. However, as new low observable aircraft come online and the number of low-band threats operating in frequencies such as UHF and VHF proliferate, the Navy had to work to counter the threat. Low frequency radars can target stealth aircraft like the F-22 and F-35, making the capability that much more critical.

However, Bailey said that he wants to make aircraft integration onto the EA-18G Growler as easy as possible. If possible, the Navy want to maintain the same outer mold line for the pods. “Anything I can do to simplify integration, especially from an aero-mechanical standpoint…the better,” Bailey said. That would allow the Navy is develop, integrate and field the new pod as soon as possible. Meanwhile, the Navy still wants new high-band pod, but that’s some time off in the future.

In the meantime, the first increment of the NGJ jammer is set to become operational in 2021. The Navy will buy 135 ship-sets for its Growler fleet. Each ship set consists of two pods each.

Meanwhile, Boeing is continuing to pitch advanced Super Hornet and Growler upgrades to the Navy. As new the new jammer is integrated and new high-speed data-links are eventually integrated onto the EA-18G, pilots and electronic warfare officers will need better situational awareness displays. Longer-term, the Navy will use groups of three Growler to passively target threat emitters using high-speed data-links like TTNT to perform a time distance of analysis.

While the Navy has made some progress in that regard, at least one industry source told me that the service will eventually have to integrate new advanced cockpit displays onto the Growler. Otherwise, the crew will be completely overwhelmed.

Dave Majumdar is Defense Editor of The National Interest.