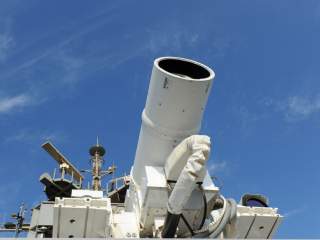 A new U.S. Navy large surface combatant might feature futuristic weapons that, until now, have been the province of science fiction.

According to a recent interview with a top naval official, the Navy envisions that its next-generation large surface combatant—or destroyer-cruise-size—ships might be armed with host of lasers, railguns and even particle beam weapons, in addition to regular missile tubes. The new design is intended as a replacement for both the Flight III Arleigh Burke-class and the Ticonderoga-class ships.

“It’s the number of cells, the number of weapons. Not just hard-kill systems but also directed-energy weapons, whatever is coming down the road. Whether that’s lasers, particle beams, rail guns, whatever comes down the road 15 to 20 years from now is really what we’re going to have to satisfy,” Rear Adm. Peter Fanta, the Navy’s director of surface warfare told Defense News in an interview.

“That means a power system that can handle it. It will have to be a hard kill, soft kill, directed-energy plus kinetic weapons blend. Enough power so when the power density gets there I can have directed energy for defensive purposes as well as the offensive long-range punch we’ll probably get off kinetics,” Fanta said. He went on to note that jamming and electromagnetic warfare would require energy sources as well.

The future warship will be a multi-mission vessel—potentially with versions of the same hull replacing both the Arleigh Burke-class destroyers and the Ticonderoga-class cruisers. It will be a “family solution” rather than a “single solution.” While the ship may or may not be built in one variant, the large surface combatant will have to replace the Ticonderoga-class cruisers in their carrier escort role.

“I need an air defense commander ship with a radar capable of handling threats with enough missile capacity—and what those missiles are will be developed over the next 10-15 years, it doesn’t have to be the current ones—to allow me to defend the sea base, whether that’s with a carrier or an expeditionary strike group or group of oilers or whatever,” Fanta told Defense News. He added that the vessel will need to “defend the sea base and conduct counter-ballistic missile, anti-shoot cruise missile and provide an offensive strike for that carrier or by itself. But everything in that sentence is completely within the capability of a slightly larger DDG 51, or destroyer-cruiser-size hull.”

Unlike in the past, the Navy is expected to develop the new ship as a multi-mission box that is able to be upgraded, making it easily adapted for new missions and technologies. “I’m not designing something that looks like a ship. I’m designing something that looks like a box in the water and I’m adding capability,” Fanta said. “Frankly whatever the naval and architects tell me that that hull shape should look like is what I’m willing to go with.”

“Modularity to me means not necessarily plug-and-play modules but being able to upgrade when technology allows me to upgrade at a reasonable rate. I can describe my next set of weapons, sensors, engineering components, hull designs that all allow me to go build that next ship. That’s more what I’m going for than a particular hull design. I’m looking for a family of ships that can do more than one thing, because every time we build a single-mission ship it tends to get decommissioned before its life expectancy.”

Fanta notes that these are just of the Navy’s initial concepts for the new ships—it’ll be at least fifteen year before construction starts on the first vessel. There are also many challenges that need to be solved to accommodate the energy weapons envisioned for the new ships. Simply providing enough power to operate the weapons is the most serious challenge, as Fanta notes. To see these plans realzied, the Navy will have to figure out the optimal energy source for these power-hungry systems.

While gas turbines can provide a lot of energy—as the DDG-1000 program demonstrates—it might not be enough. The Navy might have no choice but to resort to nuclear power when the ships start being built in the 2030s. But only time will tell.