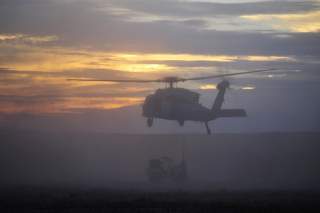 “This was a large fight. We think there were at least 125 enemy fighters in this coordinated, complex attack,” Col. Steve Warren, Spokesman for Operation Inherent Resolve, told reporters.

The firefight, which took place roughly 3½ kilometers behind the front lines, involved ISIS fighters attacking a group of Kurdish Peshmerga forces being trained and advised by U.S. service members.

“He was killed by direct fire. This was a gunfight - a dynamic gunfight – and he got hit in the course of this gun battle. There were bullets everywhere,” Warren said.

Keating died from fatal gunshot wounds sustained in combat, during an attack by Islamic State forces on his team. Keating and elements of his team were responding to a local Peshmerga force's request for support during when they were attacked.

Keating enlisted in the Navy in February 2007 and graduated from Basic Underwater Demolition/SEAL training with class 266 in June 2008.

“He is an American hero. This is a reminder of what we face every day,” Warren said.

“Enemy forces punched through the forward line. Our forces became embroiled in the ensuing battle. They called for a rapid reaction force and continued to fight until one service member was shot,” he added.

While many of the details surrounding this most recent attack remain unclear, ISIS typically uses truck bombs, bulldozers and pick-up trucks with

The ISIS method of attacking the Forward Line of Troops, or FLOT, follows a consistent pattern.

Once truck bombs explode the initial area of attack, bulldozers then clear debris to make room for combat vehicles to advance through the front lines. The pick-up trucks carrying ISIS fighters, called “technicals” by U.S. Coalition forces, often use make-shift bolt-on guns and side armor.

The purpose of the Quick Reaction Force was to quickly extract U.S. forces from the dangerous combat situation in the area; the forces there were purely on a train and equip or advise and assist mission to help Kurdish Peshmerga fighters in the area. They were not on a combat mission or they would have stayed engaged for the remainder of the firefight, Warren explained.

A portion of the roughly 4,000 U.S. forces currently in Iraq are part of train and equip and advise and assist teams designed to help local anti-ISIS fighters train for combat, best utilize their available weapons and tactics, ensure they have enough of the right supplies and examine how they position, arrange and maneuver their fighters. The intention of the advise and assist forces is not to engage in combat, Warren said.

So far, U.S. personnel have trained as many as 22,000 Iraqi and Peshmerga fighters.

Warren explained the Quick Reaction Force as a key component to mitigating substantial battlefield losses in the event of an attack.

Overall, Warren stressed that the ISIS attack was a significant tactical event – but would not have a lasting impact. He said the attack was repelled.

Citing recent ISIS loses in Ramadi, Hit, villages near Makhmur and areas along the Euphrates river valley, Warren said the ISIS offensive attack appears to be part of a larger strategy to obscure or detract attention away from their battlefield losses.

The 15th Iraqi Division has been making progress attacking ISIS in villages on the outskirts of Mosul in the vicinity of Makhmur. ISIS has also recently lost Bashir, a small city south of Kirkuk and U.S. Coalition forces are making progress taking back a route along Highway 12, Warren said.

Also, the 73rd Iraqi brigade is now further securing the recently acquired city of Hit and coalition forces are clearing a canal in Fallujah, Warren said.

“When they have suffered several defeats in a row, they will try one of these more high-profile, high-visibility attacks to distract people’s attention away from the beat-down they are taking everywhere else,” Warren explained.

Warren said a similar ISIS offensive with hundreds of fighters took place this past December, just as ISIS was beginning to lose its hold on Ramadi.