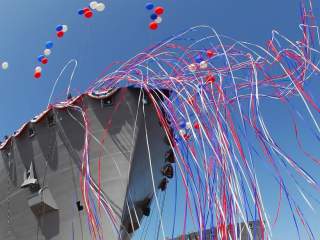 The secretaries of the armed services have been losing power ever since the enactment of the National Security Act of 1947. The service secretaries are no longer members of the president’s cabinet and rarely perform more than ceremonial duties. The Secretary of the Navy retains one power, that of naming Navy ships, and he has been abusing that power by converting U.S. ships into floating billboards for the heroes and hacks of the Democratic Party.

The current secretary is Ray Mabus, a former one term Democratic governor of Mississippi, who by clinging to the secretariat—he has been secretary since Obama took office—is using the ships of the U.S. Navy as rewards for party loyalty as he was rewarded with his post. The latest outrage is the naming of a Burke-class destroyer, a two-billion-dollar taxpayer-funded investment, after former senator Carl Levin, who didn’t serve a day in the U.S. armed forces, but who was a loyal member of the Senate Democratic caucus for thirty-one years. There was a time when destroyers were named for American naval heroes. It apparently has passed. Now, like the local federal courthouse, they are the haven of the easily forgotten hacks.

Although Mabus surely wasn’t the first secretary to use the naming of ships for political purposes, he has carried the notion that somehow the citizen taxpayers of the nation owe politicians expensive memorials to an extreme. Among his honorees are the late John P. Murtha, a disgraced Democratic Congressman who was given an amphibious warfare ship, LPD-26, despite the fact that he insulted Marines by accusing them of committing war crimes in Iraq; another, John Lewis, a serving Democratic Congressman and civil-rights icon who was given a combat oiler, TAO-205, for his years of unwavering party support.

The list goes on. John Glenn, the former Democratic senator, has a mobile landing platform, MLP-2, named after him. Gabrielle Giffords, the wounded Democratic congresswoman has a Littoral Combat Ship, LCS-10, named for her. One of the new Zumwalt-class destroyers is the USS Lyndon B. Johnson. One Burke-class destroyer is USS Roosevelt, named for Franklin Delano and Eleanor Roosevelt, and another is USS Daniel Inouye, named for the late Democratic senator from Hawaii. The point is not that these people are unworthy of a United States ship. Glenn was a naval officer and astronaut. Giffords was nearly martyred. Johnson and Roosevelt were presidents. And Inouye was a Congressional Medal of Honor recipient. Rather, it is that the naming of ships and the obligation of hundreds of millions of dollars in memorials should not be political whim.

The naming of government ships should not be the stuff of patronage. There should be clear categories—destroyers for naval heroes, attack submarines for states, carriers for presidents. And the naming of specific vessels should be left to panels of historians working under the guidance of the Smithsonian and selected by the Librarian of Congress. There shouldn’t be a USS Carl Levin just as there shouldn’t be a future USS Joe McCarthy or a USS Ted Kennedy.