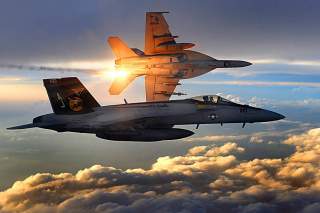 The Navy is aggressively seeking to increase the size of its F/A-18 fleet, extend the current service life of existing aircraft and integrate a series of new technologies to better enable the carrier-launched fighter to track and destroy enemy targets, service officials said.

F/A-18s are being outfitted with a real-time video sharing technology called Advanced Targeting FLIR; the system uses electro-optical and infrared cameras with powerful laser technology. This addition will help pilots more quickly zero in on and attack targets with a wider and longer-range envelope of engagement.

An impetus for the effort has several facets, including a previously unanticipated delay in the delivery of the Navy’s F-35C carrier-launched variant of the Joint Strike Fighter – along with the continued operational demands placed on F/A-18s by the need for ongoing attacks against ISIS.

“FA-18A-F aircraft will continue to receive capability enhancements to sustain their lethality and Fleet interoperability well into the next decade.  Future avionics upgrades will enable network-centric operations for integrated fire control, situational awareness and transfer of data to command-and-control nodes afloat and ashore,” Rockwellpate said.

The Infrared Search and Track, or IRST, system will be installed   by operational squadrons flying F-18s, Navy officials said.

The IRST system is being developed under a $135 million contract awarded in 2011 and is currently planned to be deployed by 2017, a Boeing statement said.

The technology has been tested on a Boeing King Air Test Aircraft, the statement added.

“Since the F/A-18 E/F fleet, on average, has already consumed approximately 46% of its 6,000 flight hour ESL, the Navy elected to initiate the F/A-18E/F SLAP earlier in the Super Hornet's service life. The ongoing F/A-18E/F SLAP effort is analyzing actual usage versus structural tests to determine the feasibility of extending F/A-18E/F ESL beyond 6,000 flight hours; via a follow-on SLEP (Service Life Extension Program),” he added.

When the F/A-18A and F/A-18C reach 8,000 flight hours, they are sent into the depot for service life extension upgrades with the hope of getting the airframes to 10,000 hours. However, many of the older aircraft are in need of substantial repairs and, at the moment, as many as 54 percent of the Navy’s fleet of older Hornets are not in service.

“Enhancements and modifications include replacing the center barrel (section) and extending the fatigue life of the Nacelles, ensuring the airframe structures achieve 100% service life. Additional modifications increase the total landing limit and modifications to catapult attachment components can be incorporated to extend total catapults,” Rockwellpate added.

The Navy’s goal is to achieve as high as 10,000 flight hours, on a select number of Legacy Hornets, to meet current and future operational demand.  To date, 186 High Flight Hour inspections have been successfully completed with 125 inspections currently in-work, he said.

As part of a need to better bridge the gap until F-35Cs start arriving, the Navy is looking to add as many as 35 new F/A-18 Super Hornets to the fleet.

The most recent 2017 budget request includes a Navy request for 21 new Super Hornets to be added through 2021. The service also placed 14 more Super Hornets on the so-called “unfunded requirements” list to Congress as part of an attempt at a further increase.

Senior Navy leaders have consistently called for the need to add more F/A-18 Super Hornets to the fleet.

A carrier air wing consists of about 44 strike aircraft made up of two 10-aircraft squadrons and two 12-plane squadrons complemented by several electrical jamming aircraft.  Therefore, the Navy’s stated need for additional squadrons would require the addition of more than 20 new aircraft.

The current composition of most carrier-based air wings includes 24 Super Hornets and 20 Hornets. The Navy plans to replace the existing Hornets with F-35Cs.The depots cannot keep up with the demand to repair airplanes due to the deployment of F-18s, industry and Navy officials have explained.

The Navy had been planning for the Super Hornets to serve well into the 2030s, but now service leaders say that timeline will need to extend into the 2040s. The Navy plans to begin buying 20 F-35Cs a year by 2020.