US Navy: We Can Build More Nuclear Attack Submarines Faster 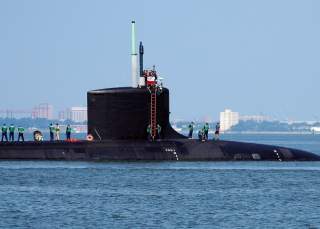 Navy leaders now say it will be possible to build more Virginia-class attack submarines at a faster pace than currently planned as part of an aggressive move to address and counter Russian and Chinese submarine expansion.

In a special exclusive interview with Scout Warrior, former Navy Director of Undersea Warfare said the Navy and its industrial partners to have the ability to build 2 Virginia-class submarines per year once production of the Ohio Replacement Program nuclear-armed submarines begins in the 2020s.
The current status-quo effort to build two Virginia-Class boat per year, however, will drop to one as construction of the Ohio Replacement Program, or ORP, begins in the early 2020s.
Rear Adm. Charles Richard, prior Director of Undersea Warfare, said the Navy has completed a special analysis of strategic imperatives and industrial base capacity on the issue which has been submitted to Congress for review.
"The new news here is that we have industrial base capacity to go to two Virginias as we go to Ohio. In our report to congress, we have an analytic underpinning that this is now a choice that is available to the nation," , said in the interview several months ago. "We are working very hard and how can we structure this so that it is something that we can go execute," Richard said.
Richard was clear that Congressional budget approvals and additional developments will need to happen in order for this plan to formally go forward, but he did emphasize for the first time that the ability to accomplish this was there. The acquisition success of the Virgina-class submarine program, he added, was in large measure one of the key reasons why the ability to build more would be possible.
(This first appeared in Scout Warrior here.)
"Every one of them now is coming in now ahead of schedule and at less cost - performance gives us the possibility to go to a 2nd Virginia in 2021. We will go below the requirement starting in 2025 and this is the last best chance to address that. This boat will address 30percent of the shortfall that we are talking about," he added.
His comments are of particular value and significance as many have previously raised the question as to whether the submarine-building industrial base would have the capacity to accomplish this.

Navy leaders have consistently talked about an expected submarine shortfall in the mid 2020s and that more attack submarines were needed to strengthen the fleet and keep stay in front of near-peer rivals such as Russia and China.

Addressing the US Navy submarine shortage is now of critical or growing importance given China's growing ability to hit the United States with a nuclear-armed missile. The Navy, naturally, seeks to maintain its considerable technological advantage in the undersea domain, something which could increasingly be challenged in coming years.

"With the right missile China now has the maritime capability to strike directly at the homeland - we have lived in they are now the second nation that possesses the ability to do that. There is not just one country able to do that but two, underscoring the important of strategic deterrence," Richard said.

Richard cited progress on the proposed plan, to be articulated in the service's 2018 five-year spending plan called a Program Objective Memorandum, or POM. Navy officials tell Scout Warrior the POM delibrerations will be "open" until the President formally submits next year's service budget proposal.

Various sub-building industry executives have indicated that this might be possible. One industry source told Scout Warrior that the submarine building community would support whatever the Navy and Congress call for.

The prospect of an acceleration comes as Navy commanders tell Congress they would like to see the fast arrival of more Virginia-Class attack submarines added to the Pacific Fleet.

Pacific Commander Harry Harris told Congress earlier this year that he would like to see more submarines in his area of operations.

“The Pacific is the principle space where submarines are the most important warfighting capability we have. As far as Virginia-Class submarines, it is the best thing we have,” Harris told lawmakers. “As I mentioned before, we have a shortage in submarines. My submarine requirement is not met in PACOM (Pacific Command).”

With their technological edge and next-generation sonar, the platform can successfully perform crucially important intelligence and surveillance mission in high-risk areas inaccessible to surface ships.  For this reason, Virginia-Class attack submarines are considered indispensable to the ongoing Pentagon effort to overcome what’s talked about in terms of Anti-Access/Area-Denial wherein potential adversaries use high-tech weaponry and sensors to prevent U.S. forces from operating in certain strategically vital areas.

Virginia-Class subs are fast-attack submarines armed with Tomahawk missiles, torpedoes and other weapons able to perform a range of missions; these include anti-submarine warfare, strike warfare, covert mine warfare, ISR (Intelligence, Surveillance, Reconnaissance), anti-surface/ship warfare and naval special warfare, something described as having the ability to carry and insert Special Operations Forces, Navy program managers have said.

“What enables this is the ship control system that we use. You can drive the ship electronically. This allows you the flexibility to be in littorals or periscope depth for extended periods of time and remain undetected,” former Virginia-Class attack submarine program manager Capt. David Goggins said several years ago.

The Virginia-Class submarine are engineered with this “Fly-by-Wire” capability which allows the ship to quietly linger in shallow waters without having to surface or have each small move controlled by a human operator, Goggins added.

“There’s a person at the helm giving the orders of depth and speed. There’s always a person in the loop. The software is telling the planes and the rudder how to move in order to maintain a course and depth. You still have a person giving the electronic signal,” he said.

Also, unlike their predecessor-subs, Virginia-Class subs are engineered with what’s called a “Lock Out Trunk” – a compartment in the sub which allows special operations forces to submerge beneath the water and deploy without requiring the ship to surface, service officials explained.

“SEALs and Special Operations Forces have the ability to go into a Lock Out Trunk and flood, equalize and deploy while submerged, undetected. That capability is not on previous submarine classes,” Goggins added.

Thus far, more than ten Virginia-Class subs have been delivered to the Navy, and seven are currently under construction.  Like other programs, the Virginia-Class submarines are broken up into procurement “Blocks.”

Blocks I and II totaling ten ships, have already been delivered.

“For each one of these tubes you have hydraulics and you have electronics. What we did for Block III is we went to two very large Virginia Payload Tubes – now you have two tubes versus twelve. It is much easier to build these two tubes,” Goggins said.

Although the new tubes were conceived and designed as part of what the Navy calls its “Design for Affordability” strategy to lower costs, the move also brings strategic advantages to the platform, service officials say.

“In the future, beyond Tomahawk -- if you want to put some other weapon in here-- you can,” Goggins said.

Also, for Block V construction, the Navy is planning to insert a new 97-foot long section designed to house additional missile capability. In fact, the Navy has already finished its Capabilities Development Document, or CDD, for what’s called the “Virginia Payload Modules.”