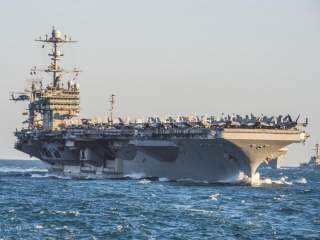 The U.S. Navy is facing a looming shortage of aircraft carriers in the Western Pacific and the Middle East this year. That could mean the contested waters around China, as well as the war against the ISIS terrorist group in Syria and Iraq, could be short-changed—going without an aircraft carrier for months.

“There is no easy way to take a ten-carrier force and operate it like you have sixteen,” retired Adm. John Harvey told Navy Times. “At some point the wheels will come off the cart.”

To avoid that gap, the U.S. Navy has is to either extend the deployment of one the carriers already at sea beyond the current seven month target or to cut short maintenance for one of the ships in the yard, according to Navy Times. But neither option is good for a carrier fleet that’s been stretched to the breaking point.

The Navy has been trying to scale back the length of carrier deployments—which have grown over the years from six months to ten months or more. Indeed, Navy leaders have noted that the ships and their crews have been pushed hard for years—reducing the service lives of the massive vessels.

In recent years the U.S. Navy’s carrier force has shrunk to only ten ships. The Navy is required to operate eleven carriers by law, but the Pentagon applied for a waiver to keep only ten ships in service. Congress granted the Navy’s request for a waiver in 2013 when USS Enterprise (CVN-65) was deactivated after more than fifty years of service.

The exemption is supposed to last until Gerald R. Ford (CVN-78) is commissioned into active service—which would finally bring the fleet back up to eleven ships. Less than a decade ago the Navy operated a full dozen carriers, until USS John F. Kennedy (CV-67) was retired in 2007.

The gap between Enterprise’s retirement and Ford’s entry into service is much longer than anyone had anticipated. “It was supposed to be a fourteen-month gap at ten carriers and now the gap will be almost eight years with shock testing being added to the Ford’s pre-deployment preparations,” Bryan Clark of the Center for Strategic and Budgetary Assessments told Navy Times.

Clark makes the argument that the Navy should make do with reduced carrier deployments and focus on getting the fleet into shape for future contingencies.

“There will likely be more security challenges going forward, rather than less, as China continues to pursue its ambitions, North Korea strives to get attention, Russia looks to shift attention from its domestic problems, and ISIS tries to regain the initiative,” Clark said.

The bottom line, however, is that the U.S. Navy has too few carriers to meet its global commitments. It’s become increasingly evident that reducing the carrier fleet at the end of the Cold War from fifteen to less than twelve was a mistake. As Harvey noted, the U.S. Navy needs about sixteen carriers.