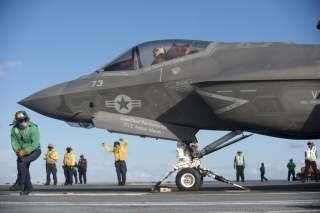 The Navy’s carrier-launched stealthy F-35C has now been armed with a full, 18,000-pound load of weapons as part of a strategy to prepare the emerging aircraft for air-to-air engagements and air-to-ground attacks against enemy air defenses.

During recent developmental testing on the USS George Washington in the Atlantic Ocean, the F-35C took oiff with one GBU-31, two AIM-120s and four GBU-12s along with its 25mm gun mounted in a pod beneath the aircraft, Lt. Cmdr. Daniel Kitts, Officer in Charge of Detachment, told Scout Warrior in a special F-35C interview from aboard the carrier.

The F-35C is also able to fire the AIM-9X along with other weapons; in the future it will have an ability to drop a Small Diameter Bomb II - a high-tech weapon now in devlopment able to track and destroy moving targets from great distances using a tri-mode seeker. The SDB II uses milimeter wave, laser and infrared guidance technology.

The ongoing DT-III testing also, for the first time, is evaluating new high-tech adjustments to the aircraft’s Helmet Mounted Display, or HMD. The sensors in the pilot’s Generation 3 HMD have been improved with new firmware to better enable pilots to target enemies and perform missions at night, Kitts added.

“This gives us more fidelity in the lower range of brightness and a degree of low-light conditions. We are developing the ability to perform targeting operations at night when it is as dark as possible, such as when there is no moon,” Kitts said. “Previously when we got to the lowest setting in brightness, the display would turn off.”

The assessment of the F-35C, designed to bring the aircraft into operational service by 2018, also included efforts to refine a precision-landing technology called Joint Precision Approach & Landing Systems, or JPALs.

Prior to these recent carrier-deck take-offs by two F-35Cs aboard the USS George Washington, the Navy extensively tested take-off and landing operations at two land facilities, Lakehurst, N.J. and Patuxent River, Md.