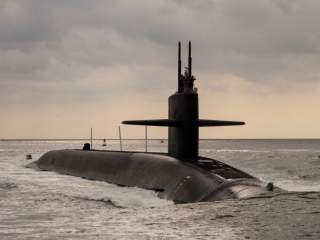 The United States Navy could save as much as 10 percent on the cost of the Ohio-class Replacement Program (ORP) if the massive submarine program were placed into a separate strategic deterrence fund. But if the Navy were to fund the program from its own shipbuilding budget, the ORP would effectively preclude the service from building other surface ships and submarines even as Moscow and Beijing grow their fleets.

“With the authorities that the fund may provide—which would allow you to make very wise business decisions—the projections are that you may save on the order of 10 or more percent across the program,” Adm. John Richardson, chief of naval operations, told the House Armed Services Committee on March 16. “Which is essentially getting one submarine for free.”

According to the Congressional Research Service, the ORP program will cost the Navy $95.8 billion for twelve boats—each carrying sixteen Trident II D5 ballistic missiles. Of that total cost, $11.8 billion would be for research and development. The ORP incorporates many advanced features like a permanent magnet motor for enhanced stealth so as to ensure it is able to provide effective deterrence over its forty-year service life. The new ballistic missile submarines will also feature a new “life-of-the-boat” nuclear reactor, which means the boomer won’t have to be refueled over the course of its lifespan.

However, while the Navy has tried to reduce costs—including cutting some features—the OPP boats remain expensive. The total procurement cost for the twelve boats is currently sitting at $84 billion—or roughly $7 billion per submarine. The Navy is trying to reduce the cost to less than $5 billion per boat—a goal that looks unlikely to be achieved.

Testifying at the same hearing, Air Force Secretary Deborah Lee James told the Congress that the Northrop Grumman B-21 stealth bomber and the Ground-Based Strategic Deterrent—which is a new intercontinental ballistic missile to replace the Minuteman III—should also be funded out of a new strategic deterrence fund. “If [there] is a strategic deterrence fund that would help or benefit one leg of the triad, I would ask for consideration that all legs of the triad be included in such an approach,” James told the Congress.

Both the Air Force and the Navy argue that the strategic nuclear deterrence mission is a national level priority that should be funded outside either service’s budget for conventional forces. It’s a view shared by many lawmakers in both the House and the Senate.