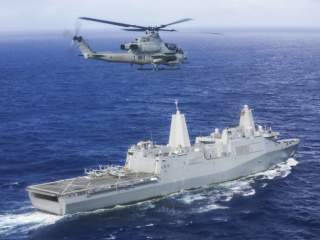 The U.S. Navy has been in discussions with shipbuilder Huntington Ingalls about the possibility of building a missile defense variant of the San Antonio-class amphibious transport dock (LPD-17). The new vessel could eventually be equipped with new radars, railguns and lasers.

The massive 25,000-ton troop carrier has the size and weight margins for the mission, according to industry officials. “You can put a lot of additional weight on the ship and you can put … some modern technologies like ballistic missile defense radars that are very heavy,” Huntington Ingalls vice president Brian Cuccias told reporters at the Surface Navy Association symposium this week, according to National Defense Magazine.

Deleting the ship’s well deck would greatly add to the vessel’s weight and stability margins. That, in turn, would allow the LPD-17 hull form to accommodate the enormous weight of a next generation ballistic missile defense radar—which are usually very large and extremely heavy.

In fact, the LPD-17 hull form would allow designers to mount the radar high on the vessel’s superstructure to give it the widest possible field of regard. “When you close in the well deck of the LPD ship you expand that capability to take a lot of weight, and the stability on LPD is such you can actually put weight up high,” Cuccias told National Defense.

Indeed, the Missile Defense Advocacy Alliance suggests that a dedicated ballistic missile defense version of the LPD-17 could feature a 30-35 foot, multi-faced, S-band radar. Such a radar would provide much greater coverage than either the current SPY-1 radars found on current Aegis warships or the next generation Advanced Missile Defense Radar (AMDR) planned for DDG-51 Flight III destroyers.

Closing the well deck would also afford the service the space onboard to host high-powered laser weapons and electromagnetic rail guns as those advanced systems become available over the next decade or two. It would also free up space to host many more missile tubes than would be possible on a destroyer or cruiser. Estimates vary as to how many more exactly, but some sources suggest that an LPD hull might be able double the missile capacity of an Aegis cruiser.

However, while the space and weight margins would be available, Huntington Ingalls and the Navy would have to figure out a way to generate enough power and cooling for such a large radar and the other directed energy weapons the sea service hopes to add to the ship.  “You can put a pretty significant power generation plant or plants on the platform and you could put pretty significant cooling capabilities on that platform,” Cuccias said. “And the platform, because of its internal volume and. . . because of its stability, can handle it without radical changes to the ship.”

While this is the first time that industry officials have confirmed that they have discussed building a ballistic missile defense ship out of the LPD-17 hull form, the idea is not new. Nonetheless, Huntington Ingalls is skittish about the details of its discussions with the Navy. “We’re talking about it and so there is some interest, but that’s as far as I really want to go,” Cuccias said.

Many analysts and retired service officials have suggested building a ballistic missile defense ship using the San Antonio’s hull—which could accommodate a huge number of missile tubes in addition to the lasers and railguns. Nor would the ship necessarily need to be solely dedicated to the missile defense mission—with its massive hull, the ship could be used for everything from humanitarian and disaster relief, to command and control, to hosting special operations forces in addition to having the firepower of a major surface combatant. If built, it would be the largest surface combatant built for the U.S. Navy since the Second World War.