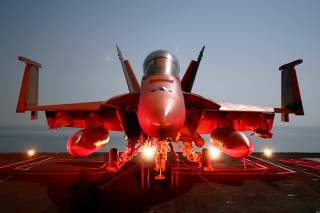 The United States Navy does not appear to have a coherent plan for how its carrier-based tactical aircraft will operate in the post-2030 threat environment. Sources tell The National Interest that even the Navy’s planned F/A-XX will not solve the service’s challenges in operating in an anti-access/area denial environment (A2/AD) defended by advanced integrated air defenses and a new generation of enemy warplanes. Meanwhile, the Navy remains skeptical of the F-35C—which is the only aircraft that might meet most of its requirements during that era.

“Naval aviation has got to get beyond the calcification and thinking that is inherent to older designs in order to be able to keep the aircraft carrier relevant in the future security environment that’s going to be dominated by advanced surface-to-air missile systems like the S-300 and S-400,” Jerry Hendrix, director of the Defense Strategies and Assessments Program at the Center for a New American Security, told The National Interest.

Despite the threat, the U.S. Navy will field only a handful of stealthy Lockheed Martin F-35C Joint Strike Fighters on the carrier flight deck in the 2030s. According to sources close to the Navy, while the service is no longer worried about the capability the stealthy single-engine warplane will bring to the fleet, both the N98 Air Warfare Directorate in the Pentagon and the Naval Air Systems Command (NAVAIR) remain extremely concerned about the cost of the F-35C. “They’re looking at it in a very short-sighted way. They’re still skeptical because the expense hasn’t come down to the degree they wanted,” the source explained. “Already the aircraft squadron buy of the new airplane is smaller than the Hornet squadron they’re supposed to replace—10 aircraft vice 12—simply because they can’t afford it.”

Hendrix said that the problem is simple. If the Navy has a flat top line budget and the new aircraft is much more expensive, the service simply can’t afford as many planes. “If you don’t have a budget line plus up, you’ve got buy fewer aircraft,” Hendrix noted. “In a flat budget environment, there is no additional money coming so you have to take the cut in your overall number of assets.”

Because of the sheer cost of the F-35C, if the Navy could find a way to leave the Joint Strike Fighter program, it would, the source said. Ideally, the Navy would like to bypass the F-35C and move directly to the nascent F/A-XX—which is still technically in an analysis of alternatives phase. “They would really like to delay it until they get to F/A-XX because they think it’ll be designed more according to their liking,” the source said. “But the fact is that F/A-XX is just a dream on a piece of paper right now and it’s a dream they’re getting push back on from DOD [Department of Defense] leadership.”

While many outside observers had assumed that a future F/A-XX would be some kind of supersonically cruising, broadband all-aspect stealth sixth-generation fighter or even a new long-range unmanned stealth bomber, the Navy’s vision for the F/A-XX is much more mundane. Not only does the Navy currently envision the F/A-XX as a manned aircraft, the service is not aiming to build a jet that is significantly more capable than the existing Super Hornet.  Indeed, the F/A-XX—as it is currently envisioned—would offer little more capability than a F/A-18E/F with some radar cross section reductions and increased range. “What they really want—unfortunately—is something that looks remarkably like an F/A-18 Hornet—just super, heterodyned and modernized. It’s essentially just a super Super Hornet,” the source said. ‘That aircraft is simply not going to be able to operate in an S-300/S-400 anti-air environment. It doesn’t have an RCS [radar cross section] that’s going to allow it to do that.”

The reason behind the bizarre F/A-XX conception is the Navy’s internal cabal of Super Hornet pilots and weapons systems officers—who the source described as the F/A-18 lobby. “The Super Hornet lobby owns naval aviation writ large,” the source said. “They’re very close to Boeing and they tend to revert to a Boeing-like design.”

Indeed, one of the reasons the naval aviation community is getting severe pushback from senior DOD leadership and Secretary of the Navy Ray Mabus is because the F/A-XX is being envisioned as an extremely conservative design that is less advanced by some margin than the F-35C, the source said. The Defense Department—particularly Deputy Defense Secretary Robert Work—and Mabus had both wanted a much more capable long-range unmanned stealth bomber, which the Super Hornet community is uncomfortable with.

According to the source, the Super Hornet community torpedoed the Unmanned Carrier Launched Airborne Surveillance and Strike (UCLASS) program because of their insistence that the drone be an intelligence, surveillance and reconnaissance (ISR) aircraft optimized for a permissive environment. The source pointed out that a deep strike optimized unmanned aircraft would be a threat to the fighter-attack community’s control naval aviation. “Butts in seats is how they justify their leadership role,” the source said.

However, the Defense Department and Secretary of the Navy insisted on a path toward a deep strike capability—which ultimately resulted in the program being reborn under the guise of the Stingray carrier-based autonomous refueling aircraft. “Naval aviation has been thrown out of the front office on at least two occasions when they come in and propose the same damn thing over again,” the source said. “They don’t want anything on the table to get in the way of F/A-XX and F/A-XX looks an awful lot like a super Super Hornet.”

Given the opposition from the Defense Department, the Navy is trying to intentionally force a decision on the future of the naval aviation enterprise into either a new Clinton or Trump administration. “They’re simply playing to get beyond this administration in hopes of getting a better bite at the apple in the next administration where they could T-up F/A-XX and perhaps truncate the F-35 buy in order to get something they really want,” the source said.

Meanwhile, the carrier air wing will still consist of venerable fourth-generation Boeing F/A-18E/F Super Hornets in the mid-2030s.  Asked directly what if any steps the service is taking to address how it intends to operate the fourth-generation Super Hornet in the post-2030 threat environment, the Naval Air Systems Command offered this: “Ongoing analysis by NAVAIR and the NAWC organizations are working to define challenges, limitations, and operational capability requirements to fight in an A2/AD 2030 environment.  Additionally, OPNAV prioritizes our capabilities into the future,” reads a Naval Air Systems Command statement. “The Navy continuously analyzes the capabilities of the Carrier Air Wing assets and potential adversarial capabilities and develops roadmaps and flight plans for technology maturation, insertion, and deployment ensuring tactical relevance well past the 2030 timeframe.  NAVAIR in coordination with OPNAV is developing investment plans for all facets of the carrier air wing; F/A-18s, EA-18Gs, E-2C/Ds, JSF, etc.”

Bryan McGrath, managing director of the FerryBridge Group naval consultancy said that the carrier air wing will look much like it does today in 2030—but with a handful of F-35Cs to fight inside highly defended airspace. “I think the Super Hornets in the fleet are going to do a lot of the same things they do today—strike/AAW/ASUW.  Operations in a contested environment where more stealthy strikers are required will likely fall to the F-35C’s, but keep in mind a Wing fights as a system, and the Growlers will be up creating opportunities for the Super Hornets with their ability to jam,” McGrath said. “Additionally, I think you’ll see a move in the next fifteen years to default to weapons that are precise—and longer range. This would enable the Super Hornets to stand off and attack.”

Bryan Clark, a senior fellow at the Center for Strategic and Budgetary Assessments, said that the Naval Integrated Fire Control Counter-Air (NIFC-CA) will be the key for the Navy’s carrier-based air operations in the post-2030 environment. One option is “using F-35Cs or Bs as stealthy ISR platforms that passively find targets, which are communicated using secure datalinks to F/A-18 E/F ‘missile trucks’ located at standoff range from threat air defenses or aircraft,” Clark said. But the Navy might also be “conducting strikes like today with F/A-18 E/Fs launching standoff weapons while protected by E/A-18Gs, but complemented by F-35C as a stealthy stand-in jamming platform.”

Additional, the Navy might eventually be able to use the future MQ-21 Stingray unmanned aerial refuelers “as ISR platforms, which send targets via secure datalinks to F-35Cs. The F-35Cs act as C2 platforms and assign targets to F/A-18 E/F,” Clark said. As such, if the Navy is simply looking at the F/A-XX to fill the gap once the F/A-18E/F leaves service, a super Super Hornet design might make sense in the overall context of the entire NIFC-CA construct—which will include everything from E-2D Advanced Hawkeyes to Aegis cruisers and destroyers.

Nonetheless, fundamentally, the problem—according to the source—is that the Navy simply does not have an answer to the question as to how the carrier air wing will fight in an anti-access/area denial environment. “Naval aviation refuses to look long range and to think about the threat environment,” the source said. “It’s no longer the future threat environment—it’s the threat environment. If the Russians put up an A2/AD bubble over Syria—if they activated their S-400 system in Syria—the F/A-18 Hornet is not going to go in there. That means the Navy is essentially locked out of the Eastern Mediterranean.”