U.S. Security in a Proliferated World Will Require a New ICBM 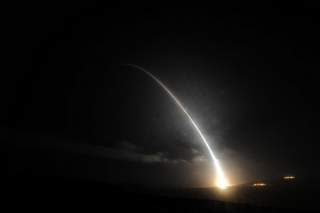 It’s really quite simple: deterrence of an attack on the United States by a hostile nation rests, ultimately, on the nuclear triad -- intercontinental ballistic missiles (ICBMs), submarine-launched ballistic missiles (SLBMs) and bombers. While each leg of the triad plays a critical role in deterring aggression, there are some circumstances in which the land-based missile force could make the difference between war and peace.  For that reason, the United States  will need to develop and deploy a new ICBM, now called the Ground-Based Strategic Deterrent (GBSD).

It is certain that in the not-too-distant future the United States will face both more and larger nuclear threats. Russia is aggressively modernizing its strategic nuclear forces and has published a defense strategy that proposes the first use of nuclear weapons to “de-escalate” conventional conflicts with other major powers. China has taken a patient, more deliberate approach but is also increasing both the size and sophistication of its theater and strategic nuclear forces. North Korea has defied decades of sanctions and political maneuvers in its march to acquire not merely a theater nuclear capability but a strategic deterrent involving ICBMs and SLBMs. How many of these systems Pyongyang will eventually deploy is unknown. Finally, it is only a matter of time before the regime in Teheran develops and deploys both nuclear weapons and long-range delivery systems.

Deterrence of large-scale attacks on the homeland requires that the United States have a secure retaliatory capability. This is the vital role played by the SLBM force. But more is needed. An adversary might seek to execute only a limited attack, against a set of critical military and leadership targets in an attempt to paralyze this country. The United States has made commitments to protecting a number of allies against attack, including with nuclear weapons. This is extended deterrence, the so-called nuclear umbrella. This country also maintains the right to use nuclear weapons to deter attack on U.S. deployed forces and overseas bases. Virtually all planning scenarios for the use of U.S. strategic nuclear forces, including those for “crazy states” such as North Korea, see their use as the outcome of an intensifying military conflict that begins without the use of nuclear weapons and then grows to involve limited nuclear attacks and, finally, large-scale exchanges.

In order for strategic deterrence to be effective, meaning that an adversary chooses not to risk an attack on U.S. forces, bases or allies by conventional or nuclear means, the United States must have the option to escalate to the next level of military intensity. This is the so-called escalation ladder. On each step up the ladder, the United States needs to be able to either defeat/destroy the enemy forces being employed or impose unacceptable costs on the aggressor.

The most important rung on the escalation ladder is provided by the GBSD force. The reason for this is straightforward. If the U.S. chooses to employ long-range ballistic missiles in response to intensifying military aggression, that adversary faces a stark choice: either accept being struck in this manner, essentially being defeated, or escalate in turn, knowing in this case that the U.S. secure retaliatory capability will annihilate that country. But the enemy must recognize that this is the only step on the escalation ladder over which he has control: the one that will inevitably lead to Armageddon.

That is the value of the GBSD force; it poses an insoluble dilemma for an aggressor. The only way to prevent the United States from employing its strategic nuclear forces to deny the adversary the fruits of his aggression is by attempting a disarming attack on them. There are only a handful of targets that involve the bomber and submarine legs of the triad. But the land-based leg includes 450 missile silos in addition to launch control centers and other facilities. This would be an attack of such magnitude that, even assuming the adversary had enough nuclear weapons to attempt it, would cause such damage to the U.S. homeland as to trigger the launch of a massive retaliatory strike. So an aggressor can either start climbing the escalatory ladder with high likelihood of failure or not commit military aggression at all.

It is the GBSD, first and foremost, that provides the United States with an ability to dominate the escalatory ladder. In addition, it provides a prompt, precise nuclear strike capability that cannot be countered effectively by existing air and missile defenses.

While the mission of the triad’s land-based leg is enduring, the same cannot be said for the missiles themselves. The current GBSD, the Minuteman III, was first deployed in 1966. Although the Minuteman III has been repeatedly upgraded and its service life extended, there are limits to what can be done. The current ICBM force is fast approaching that limit. It is not just a matter of rising maintenance costs. The reliability of the overall missile system, to include launch control centers, is increasingly at risk.

The Air Force’s current plan for the GBSD is to develop an integrated system that includes launch and command and control capability. The GBSD program will not only develop a new missile, one based on 21st century technologies, but also design in features that will allow adaptability in response to future threats. The GBSD will help secure the United States, it allies and overseas bases and forces from attack into the next century. This is a capability the nation must have and a program it must pursue.