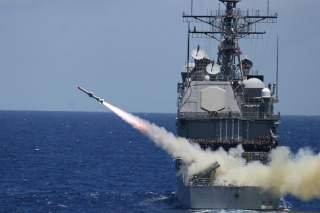 Last week Inside Defense reported that Lockheed Martin has begun work on an undersea-launched variant of its Long-Range Anti-Ship Missile (LRASM). The report, which is based on an interview Inside Defense conducted with a senior Lockheed official, said that the submarine-launched LRASM would utilize the same type of system that currently launches Tomahawk missiles. It went on to say that Lockheed is “working to integrate the missile with different targeting systems as well as different software and electrical interfaces.”

The report quoted Frank St. John, Lockheed's vice president of tactical missiles, as saying that “The primary work there is to just get it out of the sub, free of the water, and then once the engine starts it runs just as if it was dropped off a plane or shot off a ship." Testing is scheduled to start sometime in the third quarter of this year.

As previously noted, the LRASM has a reported range of 500 nautical miles and carries a 1,000-lb. penetrator and blast-fragmentation warhead. It is primarily designed to provide the U.S. Navy and Air Force with a precision-guided long-range stand-off capability that can survive in aggressive electronic warfare environments. To achieve this, it uses on-board sensors and a semi-autonomous guidance system to reduce its dependence on intelligence, surveillance and reconnaissance (ISR) platforms, network links and GPS navigation. It also employs “innovative terminal survivability approaches and precision lethality” to avoid advanced enemy countermeasures while still reaching its intended target.

The LRASM is being funded by the U.S. Air Force and Navy as a stop-gap measure because the existing Harpoon anti-ship missile has a limited range and cannot survive in contested anti-access/area-denial (A2/AD) environments. It underwent its third successful test earlier this month and is currently expected to reach early operational capability on the Air Force’s B-1s in 2018 and Navy’s F/A-18 Super Hornets the following year.

Lockheed Martin is using internal funds to conduct the ongoing research into the submarine-launched variant with an eye towards winning the second increment of the LRASM contract. Bidding for that contract is expected to begin sometime in the next few years. Inside Defense quoted St. John as saying that Lockheed has already invested $50 million in developing the three variants of the LRASM and expects to invest upwards of $100 million before all is said and done.

"All this is done on our own investment to prepare for an eventual Navy competition," he is quoted as saying in the report. “It's a significant, significant activity for us, it's one of our most important pursuits."