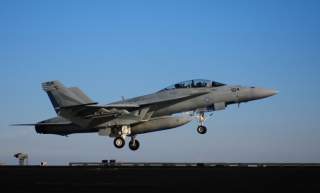 In noting that overlapping maritime claims in the South China Sea heightened prospects for miscalculation, Harris drew attention to China’s land reclamation activities in the Spratly Islands which have “now created over four square kilometers of artificial landmass, roughly the size of Canberra’s Black Mountain Nature Reserve.” Harris commented on China’s creation of a “great wall of sand,” and noted that the “scope and pace of building man-made islands raise serious questions about Chinese intentions.” (See here for satellite images clearly showing China’s efforts, as published by the CSIS’ Asia Maritime Transparency Initiative.)

On how to address the threat, the Admiral urged all states to respect the ASEAN–China Declaration on the Conduct of Parties in the South China Sea and international rules and norms in the maritime domain.

Beyond the South China Sea, Harris also had two messages for Australia: “the rebalance is for real and we’ve got the Marines to prove it,” and “the future of RAN needs to be decided soon.” On the rebalance, Harris underscored the “powerful synergy’ between Australian forces and U.S. Marines training together in amphibious operations.

… beyond the new Canberra- and Hobart-class ships—and even the SEA 5000 project which is the subject of this conference—plans for the Royal Australian Navy of the latter half of the 21st century must be conceived soon. These are strategic decisions that only you can make; choices that will have ripple effects in the coming decades; choices that will define your nation’s place in the middle and latter half of this naval century.

While he chose different words, Harris’ speech echoed similar themes to one delivered to the conference earlier in the day by Rear Admiral Christopher J. Paul, Deputy Commander of U.S. Naval Surface Force, as well as to a speech delivered by Admiral Jonathan Greenert, U.S. Chief of Naval Operations, to an audience at the ANU in February.

Harris pulled no punches in his speech at the Australian War Memorial; his comments on China surely rank among the most forthright from a senior American figure. The Admiral turned in a clear assessment of the myriad strategic challenges present in the Indo-Asia-Pacific, and he didn’t shy away from questioning China’s assertive behavior and the need to resolve with priority questions of Australia’s future maritime requirements.

His remarks will likely be well received in both Australia and in the broader Asia–Pacific, though less so in China. The Australian government is keen to support continued American primacy in the region by deepening and broadening cooperation with fellow U.S. allies and partners, as the Obama administration has occasionally requested. In part, this reflects an Australian desire to sustain a positive contribution to preserving good order in the Asia–Pacific and the broader international system. It also shows an understanding of the U.S. rebalance being materially underway but with the perception of being politically underpowered. Australia needs to do its part and Harris’ request that Australia play not just a “large role in global security affairs” but instead a “leading role.” should serve to deepen resolve in Canberra.

Harris’ frank appreciation of Chinese strategy will be welcomed across the region. As China’s coercive and assertive behaviors have unfolded and ramped-up over recent years, Asia–Pacific states have increasingly questioned American resolve in the region. Harris’ words will reassure states across the region that American commitment remains strong.

At an ASPI dinner last year, Harris spoke of China’s dangerous unilateral declaration of an Air Defence Identification Zone over the East China Sea. This year he focused on China’s maritime actions in the South China Sea. The light guiding both speeches, however, was the U.S.–Australia alliance, and its role as an ever-relevant and never-more-important contribution to peace and stability in the Asia–Pacific.