U.S. Navy Unmanned 'Swarm' Weapons Can Perceive What’s Around Them 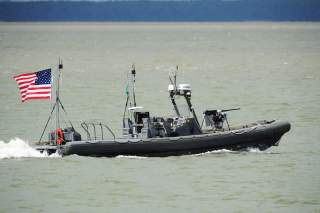 The USVs are programmed with sensors linked to an established database of known threats such as enemy boats; they are also linked to one another with an ability to detect, track and trail unknown boats, Brizzolara said.

ONR is working closely with the Pentagon’s once-secret Strategic Capabilities Office, or SCO, in an effort to fast-track this technology into operational service.

A key advantage of using remotely-controlled drone ships is that they can save sailors and marines from being exposed to enemy fire during an attack operation. In fact, Roper maintained that USV autonomy brings the potential of substantially advancing amphibious warfare tactics.

“This can greatly help expeditionary logistics for a ship that is standing off from the shore. Instead of having to use an amphib manned by a lot of people, you have an unmanned supply boat,” Roper explained.

Higher tech enemy sensors and longer range surface and land-fired weapons have drastically increased the vulnerability of approaching amphibious assault operations, making them more susceptible to enemy fire. As a result, the Navy and Marines have been evolving amphibious tactics to include more approaches designed to spread out an approaching force – making it more difficult for enemy weapons to attack an advancing assault.

For example, the Iwo Jima attack in the Pacific during WWII, an historic amphibious assault, involved a group of Marines approaching enemy shores in close proximity to one another; weapons, Marines, equipment and attacking infantry all came ashore in rapid succession.

“Instead of having to land as a single unit, they can now break out. There is safety in numbers and they can redistribute,” Roper explained.

When it comes to offensive surface operations, unmanned boats could form a swarming of small attack craft designed to overwhelm and destroy enemy ships with gunfire, explosives or even small missiles.

The Navy and ONR are already immersed in the development of a variety of USVs, including a mine-detecting Unmanned Influence Sweep System, or UISS, for the Littoral Combat Ship. The UISS is carried by a Textron-developed Common Unmanned Surface Vehicle or CUSV.

The CUSV, in development since before 2009, can travel for more than 20-hours carrying up to 4,000-pounds at speeds of up to 20-knots, Textron said. Also, it is engineered to withstand waves up to 20-feet.

The UISS is engineered to find and detonate undersea mines in order to save sailors and manned vessels from a potentially deadly explosion.

The Navy’s UISS will be towed behind the unmanned vehicle and will emit sounds and magnetic signatures that mimic a ship – setting off nearby mines that listen for passing ships, according to a report from the US Naval Institute.

Kris Osborn is editor-in-chief of Defense Systems where this first appeared.