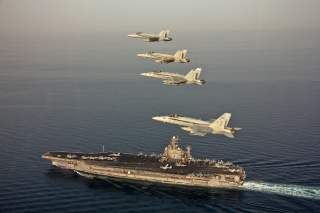 The Nimitz-class aircraft carrier USS Abraham Lincoln (CVN 72) is back at sea for the first time in more than four years.

The massive hundred-thousand-ton vessel is undergoing sea trials after completing her refueling complex overhaul (RCOH), which happens once at the twenty-five-year halfway point of a carrier’s fifty-year lifespan. With the completion of its forty-nine-and-a-half-month overhaul, Lincoln is the first carrier in the U.S. Navy’s fleet that will be able to operate Lockheed Martin F-35C Joint Strike Fighters from its decks.

“Our team has worked hard to get USS Abraham Lincoln ready to re-deliver to the fleet. She has undergone significant combat systems modernization and will also be the first CVN capable of accommodating the F-35C Lightning II,” Rear Adm. Brian Antonio, Naval Sea Systems Command’s program executive officer for aircraft carriers, said in a May 9 statement. “This RCOH enables the ship to meet future missions and continued service life requirements for many years to come.”

According to service, sailors assigned to Lincoln, shipbuilders from Huntington Ingalls Industries-Newport News Shipbuilding (HII-NNS), the Navy's Supervisor of Shipbuilding, Conversion and Repair and Naval Sea Systems Command personnel will put the ship though its paces over the next four days. The different groups will have to work side-by-side to test the carrier’s key systems and technologies to ensure Lincoln is ready to reenter the fleet. “Sea trials will provide an opportunity to test comprehensive shipwide repairs and combat system modernization items worked over the duration of the overhaul,” reads a NAVSEA statement.

A RCOH is no ordinary overhaul—the ship was practically rebuilt during the overhaul. According to the Navy, more than 2.5 million man-hours of work were conducted aboard the massive vessel. Some of the work included refueling the ship’s two nuclear reactors, upgrading the ship's infrastructure, and modernizing its combat systems and air wing capabilities. When it is returned to the fleet, Lincoln will be the most modern and advanced of the Nimitz-class vessels.

Abraham Lincoln and its crew will undergo multiple training scenarios and qualification evolutions during its sea-trials to ensure that the ship is performing as expected. “We are looking forward to taking the ship out on the open water where we belong,” Capt. Amy Bauernschmidt, Lincoln’s executive officer, said. “I am honored to serve with our crew. This dedicated and impressive group put an incredible amount of work into revitalizing this ship. We are grateful for their efforts and to our partners at Newport News Shipbuilding, and eagerly anticipate completing successful sea trials and returning to the fleet ready for tasking later this year.”