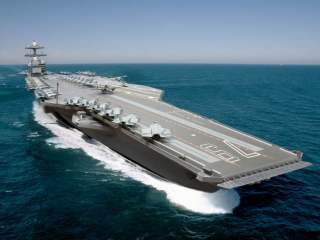 Should the U.S. Navy name a future Ford-class carrier after President Barack Obama?

Since the 1990s, most of America’s aircraft carriers have been named after U.S. presidents, save for the USS Nimitz (CVN-68), USS Carl Vinson (CVN-70) and USS John C. Stennis (CVN-74). Thus far, out of the planned ten-carrier Ford-class, the Gerald R. Ford (CVN-78) and the John F. Kennedy (CVN-79) are named after presidents, but CVN-80 will follow the long tradition of using the name Enterprise. The next carrier after Enterprise, CVN-81, will likely be revert to the convention of naming carriers after presidents. Indeed, there is a case to be made for naming the ship USS Barack Obama.

U.S. Navy ships are named by the secretary of the Navy—under the direction of the president—according to a 2012 Navy report to the Congress. But within the Navy there are two warring camps—“orthodox traditionalists” who believe ship names should rigidly follow naming conventions, and “pragmatic traditionalists” who are more flexible.

Naming conventions for aircraft carriers and for other ships have changed over the years, but the current unofficial convention was adopted in 1996 with the 104th Congress. The Republican-dominated Congress demanded the Democratic President Bill Clinton name the next carrier after President Ronald Reagan. Clinton acquiesced after a compromise was reached—CVN-75 would be renamed Harry S. Truman after the thirty-third and Democratic president, instead of being called United States.

According to the report, current Navy Secretary Ray Mabus supports the current convention with some exceptions to give future Navy leaders some flexibility. That is why he named CVN-80 Enterprise after CVN-65, the former USS Enterprise, was decommissioned in 2012. The name Enterprise has a long and storied history, not only was CVN-65 the nation’s first nuclear-powered carrier, but its predecessor USS Enterprise (CV-6) was the most decorated ship of the Second World War. Moreover, the convention gives Navy leaders the option to name other ship types after presidents—USS Jimmy Carter (SSN-23) is a Seawolf-class submarines. It was so named because Carter was a nuclear submarine officer during his naval career.

Ultimately, there are a variety of factors that go into ship names—but politics clearly play a prominent role. Given the current trend line—three Republican-named carriers in a row, then one Democrat-named carrier—perhaps the U.S. Navy can look forward to not only a USS Barack Obama but also a USS William Jefferson Clinton.