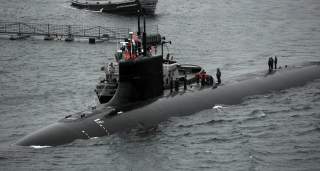 While General Dynamics Electric Boat was still putting the submarine together in 2001, NSA director Lt. Gen. Michael Hayden laughed off claims about breaking into undersea cables in an interview with the Wall Street Journal. “I’m not going to sit here and dissuade you from your views,” Hayden said, before refusing to comment on Jimmy Carter‘s mission. Two years later, the Journal again reported that the submarine’s role suggested an undersea spook, citing “people knowledgeable about it.” After more than a decade of apparently very active service, little else has slipped out about the ship or her operations.

It was all quite mysterious. During her time at sea, we don’t know where Jimmy Carter was or what her crew of nearly 150 were precisely doing. The Seawolf class is one of the most secretive weapons in America’s arsenal, and information about the Navy’s “Silent Service” is difficult to discover. . . by design.

We know Jimmy Carter was on some kind of mission, which the ship’s official annual history vaguely referred to as Mission 7. “Performed under a wide range of adverse and extremely stressful conditions without external support, this deployment continued USS Jimmy Carter‘s tradition of excellence in pursuit of vital national security goals,” the history stated.

As the last of the Seawolf-class attack submarines, Jimmy Carter is unique. During her construction, the Pentagon added a special one-hundred-foot-long, 2,500-ton module called the Multi-Mission Platform. By the sailing branch’s own admission, this space can accommodate undersea drones, SEALs and much more.

The sailing branch eventually grouped together the USS Seawolf, Connecticut and Jimmy Carter as the core of Submarine Development Squadron Five. The unit’s spartan Web site states it is responsible for testing new undersea listening gear and remote-controlled submersibles, either tethered to a larger sub or able to operate on their own.

“The Navy, with strong input from the NSA, was first sending Parche to Okhotsk to plant a second recording pod. . . to greatly increase capacity at the tap site,” Sherry Sontag and Christopher Drew wrote in Blind Man’s Bluff: The Untold Story of American Submarine Espionage. “She was being sent, in part, to prove herself before anyone dared to send her to that other, far more dangerous sea.“

Success at Okhotsk paved the way for missions in the far more crowded—and therefore dangerous—Barents Sea. To hide from Moscow’s sub-hunters, Parche hid under the cover of the Arctic ice as she sneaked into congested shipping lanes.

We could easily have to wait another decade or more for there to be any real confirmation—likely from a book like Sontag and Drew’s rather than the Navy—about Jimmy Carter‘s unique history and details about Mission 7.