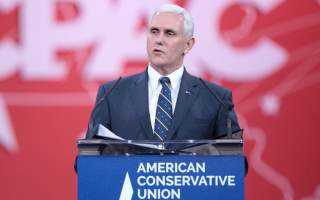 Vice President Mike Pence attempted to assure conservative activists on Thursday that Obamacare is on its way out.

“Let me assure you,” Pence said at the annual Conservative Action Political Conference, or CPAC, “America’s Obamacare nightmare is about to end.”

As plans to repeal and replace Obamacare remain in limbo, Pence made the issue centerfold in his keynote address at CPAC, the largest annual gathering of conservatives. Pence promised to repeal Obamacare, “eliminating its mandates, its taxes, and its intrusion into your business and into your lives,” saying Obamacare would be “replaced with something that actually works.”

“Despite the best efforts of liberal activists in town halls around the country,” Pence added, “the American people know better. Obamacare has failed and Obamacare must go.”

Adding fuel to the fire, Pence referred to the “promises liberals made about Obamacare” as “fake news.”

“Now we all know the truth. Today Americans are paying $3,000 more a year on average for their health insurance. Last year, premiums skyrocketed by a stunning 25 percent. Millions have lost their plans and lost their doctors. Higher costs. Fewer choices. Worse care. That’s Obamacare.”

He also said the Affordable Care Act was a “job killer.”

Discussing replacing Obamacare, Pence was dismissive of “all the fearmongering from the left,” and said there would be “an orderly transition to a better health care system that finally puts the American people first.”

He detailed what he and President Donald Trump would do to ensure all Americans had “access to quality and affordable health care insurance, which is why we’re designing a better law that lowers the cost of health insurance without growing the size of government.”

We’re going to make sure that Americans with pre-existing conditions have access to health insurance and the security they need, and we’re going to give states the freedom and flexibility to take care of the least fortunate in the best way that will work in their state and in their community.

It was Pence’s ninth time addressing CPAC, but his first time doing so as vice president. CPAC, the largest annual national gathering of conservative activists, runs from Wednesday to Saturday at the Gaylord National Resort and Convention Center in National Harbor, Maryland, just outside Washington.

Pence spoke about Trump’s “historic” victory, noting he won 30 of 50 states, and saying that “the media, the elites, the insiders, everybody else who profits off preserving the status quo,” had “dismissed our president every step of the way.”

But he also cautioned the “fight didn’t end” on Election Day, saying “the harder work, the most important work, now lies ahead.”

He said under Trump, “no state will ever be forced to adopt the Common Core [standards],” and highlighted the administration’s approach to Israel, “our most cherished ally.”

“Israel’s fight is our fight. Her cause is our cause. Her values are our values.”

“President Trump has assembled the strongest conservative Cabinet in my lifetime, bar none,” Pence said.

Pence told conservatives they have a “once-in-a-lifetime opportunity” to accomplish this agenda. “My friends, this is our time. This is the chance we worked so long to see.”

In order to accomplish all this, Pence said, “We got to mobilize. We got to march forward as if it’s the most important time in the history of our movement, because it is.”

He called on young conservatives to “use social media to fight back.”

“More than anything,” Pence concluded, “Trump and I need your prayers.”