Vietnam Has a Plan to Win a War Against China. (And China Could Use It Against America) 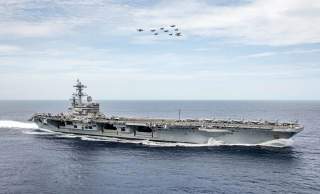 Since the days of the Viet Minh, Vietnam has been secretive about its strategy, as the United States discovered during the Tet Offensive. But a pair of American scholars have sifted through the available information to offer a glimpse of how Vietnam would fight its much, much larger neighbor and rival.

"Analysts have spilled much ink in recent years assessing the Vietnam People's Army's (VPA) procurement or indigenous development of specific weapon systems," according to researchers Derek Grossman and Anh Nguyen. "Yet comparatively little has been written on the thought process behind acquisition of these new capabilities, and whether Vietnam has a military doctrine or concept of operations in place to effectively guide their employment in future South China Sea conflicts."

Grossman, an analyst with the Rand Corporation, and Nguyen, a graduate student at University of California San Diego, have sifted through what information is publicly available to offer a few surmises about how Vietnam would battle China in the air and at sea. The authors start by admitting that they are not sure whether Vietnam has a comprehensive air or sea doctrine in the Western sense—perhaps not surprising given that Vietnam has historically been a land power.

"We are very confident, however, that the VPA has two overarching principles that impact all military planning," the authors add. First, Vietnam will emphasize defense over offense. This resembles China's “active defense” approach, which couples a strategic defense with aggressive offensive tactical operations.

"VPA thinkers tend to suggest that the best strategy is to identify threats and quickly prevent them from changing the status quo in the South China Sea," Grossman and Nguyen write. For example, Vietnamese strategists have indicated that the best way to counter Chinese amphibious and airborne operations is to engage them far from Vietnamese shores. Vietnam aims to hit Chinese naval and airborne forces at their staging ports and airfields in the South China Sea (though probably not installations on the Chinese mainland, which would be a dangerous escalation). The strikes would be conducted by "missile ships, submarines, naval aviation, shore-based anti-ship missiles, long-range artillery, elite forces, island defense forces, and other forces.”

Sound familiar? It's the same weapons and tactics that China—as the weaker naval power—would use against America during a conflict in the South China Sea.

In addition, just as Maoist China embraced the concept of people's war, so too will Vietnam use that strategy against China. Hanoi would mobilize the entire population to wage asymmetric warfare against a stronger opponent.

"To carry out people's war at sea, the VPN has said 'we need to exploit our geography, especially our caves and islands as places to station and hide our ships and to support operations logistically,'" write Grossman and Nguyen. Already, Vietnam has bought six Russian Kilo-class diesel submarines, as well as K-300 Bastion-P coastal defense missiles, that can hit Chinese surface ships. Meanwhile, Vietnam is using thousands of small civilian vessels to monitor its maritime borders against Chinese encroachment in the disputed South China Sea.

There is much less information about Vietnamese air warfare doctrine, though indications are that the country's limited number of fixed-wing aircraft, including Russian-made Su-30 fighters, would be employed carefully and sparingly. "Notably, we have seen no references to air-to-air operation," Grossman and Nguyen add.

What about ground warfare? The authors focused on Vietnamese naval and air doctrine, but Nguyen believes Vietnamese ground combat strategy will be similar to what Hanoi employed against the French, Americans and Chinese. "That being said, Vietnam has also explored defensive strategies and tactics against amphibious and airborne operations, showing that they deem the chance of such attacks is higher than in the past," Nguyen told the National Interest. "They also have more capabilities than during the past wars, so they have been experimenting new abilities, such as using airborne troops or mechanized warfare. But overall, it still very much centers around the people’s war doctrine and defensive warfare that was used against the French, the U.S. and against China in 1979."

Yet what worked in the jungles and mountains of South Vietnam may not work in the South China Sea. Hanoi's struggle against the French and Americans was primarily a ground war that played to its strengths in guerrilla warfare and mass mobilization. A Sino-Vietnamese conflict over control of the South China Sea would be mainly an air-naval battle waged with high-tech aircraft, ships and missiles. That's not a scenario that favors a small, poor nation like Vietnam.

Hence, Hanoi may be in for a rude awakening if it battles Beijing. "Vietnam's evolving military doctrine will certainly be tested by the VPA's unfamiliarity with combat in the sea and air domains," warn Grossman and Nguyen. "Far longer distances and unpredictable weather conditions in the region pose just a few of the many new problems the VPA will encounter in the South China Sea. As a historically land-centric military, the VPA will have to think more deeply—and train more regularly and realistically—in these domains to stand the best chance in a future conflict."