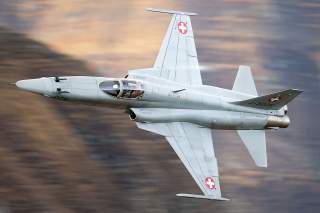 Is Vietnam really planning to refurbish its fleet of fifty-year-old U.S.-made F-5 fighters captured from South Vietnam? Or is this just a Russian ploy to spur Vietnam to buy Moscow’s warplanes, amid growing speculation that Hanoi may turn to the West for aircraft?

At stake are the F-5s captured in 1975 when North Vietnam’s Soviet-equipped armies conquered South Vietnam. Among the spoils of war seized by Hanoi was a vast array of U.S.-supplied tanks, artillery and rifles (including nearly a million M-16s). The finds were so great that unified Vietnam became one of the most well-armed nations on the planet in the mid-1970s. The haul also included eighty-seven F-5A Freedom Fighters and twenty-seven F-5E Tiger IIs, part of the Northrop (now Northrop Grumman) F-5 line of lightweight, low-cost fighters that the United States exported to numerous third-world nations during the Cold War.

Vietnam sent a few F-5s to the Soviet bloc for evaluation (where Soviet pilots were reportedly impressed with the Tiger II’s performance), while some of the remainder flew in support of Hanoi’s 1978 invasion of Cambodia. “The F-5E/Fs were reportedly more popular with their Vietnamese crews than were the Russian-built aircraft that provided the primary strength of the Vietnamese air force, which is a rather unique testimonial,” states one aviation website. “They were particularly appreciative of the comfortable cockpits and the ease of handling of the F-5. However, the lack of spare parts and replacements gradually took its toll, and led to a need for cannibalization and to the gradual reduction of the numbers of F-5Es available for service.”

In fact, Vietnam’s F-5 fleet is thought to have been totally grounded, a rusting footnote to a long-ago war. Until this week, when Russian media site Sputnik News published a story titled “What Possible Revival of ‘Tiger’ Fighter Jets Could Mean for Vietnam’s Aviation.” The story cited “Vietnamese media” reports that Hanoi is considering bringing back the F-5.

That came as a surprise to some Western analysts. “My understanding was that the F-5s were really beyond repair,” said Zachary Abuza, a professor at the U.S. National War College who studies Southeast Asian security. “I was in Vietnam last month, and no one even raised this as a possibility.”

Most interesting was that the Sputnik story was more than a simple news report on what would seem to be a minor Asian aviation issue. Instead, the story featured an analysis by a Russian military expert. Analyst Makar Aksenenko suggested that Israeli companies might perform the refurbishment, as they did for Thailand’s F-5s. He also saw it as a way for the Vietnamese Air Force “in a short time and quite cheaply manage to obtain a battle-worthy reserve for replenishing the fleet of attack aircraft.”

However, the article also concluded that refurbished F-5s would only be an emergency measure that would still leave Vietnam with a need for modern aircraft. Vietnam currently flies about forty Russian Su-27 and Su-30 aircraft, a number that has been depleted by several recent crashes—and a small quantity compared to its neighbor and rival China.

“Vietnam has publicly been in the market for trainers and new squadrons of fighters for a while,” Abuza says. “I kind of assumed that it would be a no brainer for them to get more Sukhois because of cost, values, reliability and familiarity. But that they are taking so long to make the decision may be making folks in Moscow nervous.”

In fact, there have been reports over the last few years that Vietnam is interested in buying U.S. and European military aircraft. In May 2016, President Barack Obama announced that the U.S. arms embargo on Vietnam had been fully lifted.

“Vietnam is one of Russia’s largest arms purchasers, if not the largest in recent years, and I am sure that Moscow wants it to stay that way,” says Abuza.