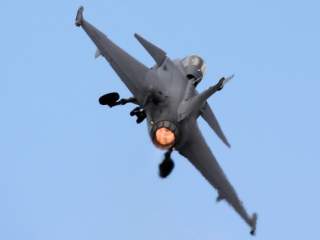 Vietnam is negotiating with American and European manufacturers to purchase new warplanes—including fighters, maritime patrol aircraft and unmanned aircraft. The move comes as part of Hanoi’s strategy to lessen its dependence on Russian hardware and to counter China’s growing power.

According to Reuter’s Siva Govindasamy, Vietnam has been in talks with contractors who build the Saab JAS-39E/F Gripen NG, Eurofighter Typhoon, Lockheed Martin F-16 Fighting Falcon and the Boeing F/A-18E/F Super Hornet. It’s also taken a hard look at Korea’s F/A-50 lightweight fighter—which was developed in cooperation with Lockheed.

While Washington and Hanoi have been on better terms in recent years, with the U.S. defense secretary visiting the nation as recently as last June, buying an American combat aircraft might still be a bridge too far for Vietnam. The memories of the Vietnam War—which was much more devastating for Vietnam than for the United States—might mean that Hanoi will have reservations about dealing with American contractors. As such, a European warplane might have an edge. Indeed, Vietnam is known to have held fairly advanced discussions to buy the Typhoon, according to Reuters.

But Hanoi needs more than just fighters. Given its maritime disputes with Beijing, Vietnam needs maritime patrol aircraft and surveillance capabilities. The country has been talking to the Swedes about maritime patrol and airborne early warning variants of the Saab 340 or 2000 twin-engine turboprops, according to Reuters.

Vietnam has also discussed purchasing a maritime patrol version of the Airbus C-295, Lockheed’s Sea Hercules variant of the C-130 transport and a Boeing offering of a business jet fitted with much of the surveillance suite from the P-8 Poseidon. The Boeing offering would not include anti-submarine warfare capabilities however.

Hanoi is also looking for unmanned surveillance aircraft to help patrol its vast shoreline. However, no details are available on exactly what aircraft the country wants to buy. But as tensions with China look to continue unabated, Hanoi is almost certain to explore is options and, in doing so, start moving closer to Washington.