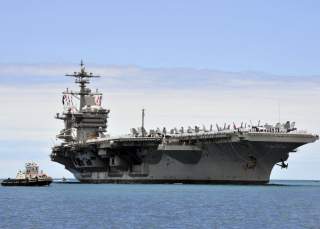 A new report published by the Hudson Institute concludes that the U.S. Navy’s carrier strike groups (CSG) and their air wings are vital to tackling China’s anti-access/area denial capabilities (A2/AD). But report—titled Sharpening the Spear: The Carrier, the Joint Force, and High-End Conflict, which is written by TNI contributors Seth Cropsey, Bryan McGrath & Timothy A. Walton—also concludes that the Navy must adopt new operating concepts and fundamentally reconfigure the carrier’s air wing for tomorrow’s fight.

Instead of today’s steady-state operations—where the Navy doesn’t expect an enemy to directly challenge a CSG—the service would need to adopt a “Power Pulse” operating construct. “In response a concept of pulsing combat power—or what has often been called ‘hit and run’ tactics should be explored for use against mature A2/AD threats,” the report states. “CSG Power Pulse operations would have significant implications for necessary capabilities, including changes to the make-up of the air wing, an increase in the demand for fuel and supplies to support higher-tempo, multi-location maneuvering and flight operations, an increase in the demand for CSG-independent ASW [anti-submarine warfare] forces to conduct multi-location ASW precursor operations, and implications for other components of the Join Force.”

Under the concept, carriers would operate at the edge of an enemy’s A2/AD capabilities and use long-range weapons against selected targets. The strike group would then have to dart away at high-speed to its next operating area to launch another attack—all while maintaining radio silence. “By repositioning frequently at range, CSGs would increase an enemy’s required search area and consume available ISR [intelligence, surveillance and reconnaissance] resources,” the report states.

The Navy should also consider multi-carrier operations—something the service has not attempted since the Second World War. “By operating as groups of mutually-supporting carriers and supporting ships, multiple carrier CSG operations can more effectively meet baseline battlespace dominance requirements and dedicate a higher proportion of the force to offensive power projection and sea control missions,” the report states.

The Navy also needs to reemphasize its sea-control mission—which the service allowed to atrophy in the absence of the Soviet threat. The Navy’s anti-surface warfare and its anti-submarine warfare capabilities are not what they used to be. “The Navy should critically examine the burgeoning future requirements for sea control and adequately adjust its programmatic portfolio to meet those threats,” the report states. Navy also needs to develop a single integrated battle plan for the sum total of its forces so that it can make the best use of its resources. The authors also advocate for the Navy’s carrier air wings to work much more closely with the Air Force’s long-range bomber force to take on A2/AD challenges.

But while the Hudson report stresses the importance of the carrier fleet, the authors argue that the Navy must revamp the carrier air wing. The service needs new specialized aircraft to meet the challenges it will face in tomorrow’s wars rather than toda’s Boeing F/A-18 Super Hornet-based wing. The authors suggest that the Navy should consider developing an organic carrier-based tanker to replace the now-retired KA-6 and S-3 Viking, but ultimately, the service needs longer range aircraft that can operate from outside the enemies range.

That could be accomplished by extending the range of the F-35C and F/A-18E/F, but ultimately the Navy needs a new aircraft. “Given the operational demands of the pacing threat, it is imperative that the future F/A-XX sixth generation fighter envisioned to replace the F/A-18E/F be fielded with operationally relevant increases in range,” the authors write.

The Navy also needs a sea-control aircraft. “A critical gap in the air wing is organic, persistent ISR and targeting, something the ongoing UCLASS acquisition is at least partially attempting to address. The carrier’s contribution to scouting is one that originates with its very inception. Given the dual trends of increased adversary power projection and sea denial threats, and the trend of increased strike capability of other aspects of the Joint Force, the ability of the carrier to effectively scout is a critical aspect of its capability,” the authors write. “For example, carrier scouting by a low observable aircraft could increase the effectiveness of submarine, long-range bomber, and surface ship strikes against adversary land and ship targets.” The Navy also needs a broad area anti-submarine warfare aircraft to replace the S-3.

But the Hudson report also calls for the development of a separate strike oriented carrier-based unmanned jet: “A strike-optimized UAS could be used to neutralize enemy combatants, IADS, and land targets. Strikes against defended targets will likely require a combination of manned and unmanned aircraft and airborne electronic attack. Strike-optimized UAS could offer new tactical options for strike packages, such as the release of swarming weapons nearer to a target, while other aircraft fire longer-range stand-off weapons. If properly designed, a strike-optimized UAS could also conduct outer air battle air warfare missions, either through autonomous or directed aircraft engagement or directional airborne electronic attack. Through all-aspect low observable features, these UAS could approach near enemy platforms for taking high probability of kill missile shots.”

Most interestingly, the report calls for the Navy to develop a new dedicated air superiority fighter—something that service has not had in its inventory since the Grumman F-14 Tomcat was put to pasture. “Another type of new aircraft required is an air superiority fighter. Given the projection of the Joint Force’s increased demand for carrier based fighter support, this capability is critical,” the report states. The authors cite the severe deficiencies that both the F/A-18 and the F-35 face versus the latest Russian and Chinese fighters. “If the nascent F/A-XX program determinedly focuses on fighter requirements, it has the opportunity to address this major gap,” authors state. “The danger in its development is that it suboptimizes the fighter role in the quest for a hybrid fighter/attack jet. This would leave the Joint Force without a carrier-based sixth generation air superiority fighter.”

The authors also note the need to develop new munitions—which tend to be a blind spot for the Pentagon: “A third focus area the Navy should pursue is the development of new munitions and sensors. As mentioned earlier, new weapons with increased range are needed for the air wing.”

The report effectively addresses how the Navy should fight in the Western Pacific in coordination with the Air Force. The carrier and its air wing are going to remain critical to the “joint fight.” But there is the one question the report doesn’t address: How we pay for all this without breaking the bank?