Wanted: A Real War Of Ideas With Russia 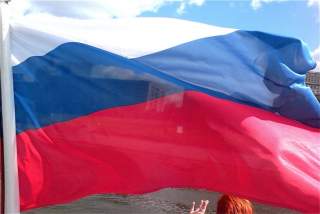 Don’t look now, but Moscow is winning the media war.
Since the start of the crisis over Ukraine some four months ago, Russia has waged a massive, sustained media campaign to shape global perceptions about events taking place on the ground there. This offensive—carried out en masse via state-run outlets like Russia Today and through an onslaught of print, radio and television reports—has included everything from blatant mischaracterizations of Ukraine’s political parties to outright fabrications about the extent of the pro-Russian sentiment that exists in the south and east of the country.
The effort is unprecedented in scope. According to Russian political commentator Igor Eidman, it amounts to the “biggest information special operation” in modern history. And, up until now, it has gone on largely uncontested. The United States and Europe, divided over how best to respond to the Ukraine crisis specifically, and Russian policy more generally, have marshaled little by way of a strategic response.
Without a countervailing message, Russia’s outreach has resonated. At home, having spun his government’s incursion into Ukraine as a strategic victory, Russian president Vladimir Putin is riding a wave of unprecedented popularity. A new survey recently released by the Moscow-based Levada Center has found that Putin enjoys an 82 percent approval rating among Russians between the ages of 40 and 54—and an even higher one among those citizens who are too young to remember the days of the Soviet Union. Abroad, meanwhile, more than a few foreign publics have accepted the idea that Crimea’s annexation was more or less legitimate, and that further Russian action in Ukraine—while undesirable—might not be so unwarranted after all.
Belatedly, American public diplomacy is attempting to push back on this narrative. The various organs of U.S. international broadcasting (chief among them Radio Free Europe and the Voice of America) have done so by ramping up their coverage of events in the “post-Soviet space.” They have also launched initiatives like “Crimea Realities,” a new website dedicated to countering disinformation about conditions in Russia’s newest region. But much more needs to be done.
Most glaringly, U.S. outreach requires resources in order to properly compete with that of Russia. Currently, the Voice of America’s Russia Service is funded to the paltry tune of just $13 million annually—a mere fraction of the $300 million a year that Russia Today alone is estimated to spend on its particular brand of “news.” At this level, U.S. public diplomacy toward the Russian-speaking world lacks anything resembling the scope and reach needed to counter the Kremlin.
The funds to do so, moreover, are readily available, tucked away in various corners of the U.S. government (such as the U.S. Agency for International Development’s now-defunct U.S.-Russia Investment Fund). They simply require attention from Congress in order to be repurposed and harnessed for public diplomacy purposes.
Even more vitally, U.S. broadcasting needs sustained attention from the White House. In its first term, the Obama administration made the idea of a “reset” of relations with Russia a centerpiece of its foreign policy agenda. That approach had fallen on hard times even before the recent events in Ukraine. In their wake, it has been utterly discredited. The White House has been at pains to articulate anything resembling a coherent policy toward Russia since. And because it has not, the official media response to Putin’s Russia has remained largely rudderless.
A new approach is sorely needed. Russia’s aggression toward Ukraine represents nothing less than a challenge to the established political and legal order in Europe. As such, it requires a robust, unified reply from Western powers. And by necessity, countering Russian propaganda will need to be an essential component of any such effort. If we are to have a hope of resolving the current crisis without further adventurism on Moscow’s part, Russian citizens need to understand the potential political and economic costs involved for them—and foreign publics must grasp the implications of the current crisis for long-term European security and unity.
It is long past time for the United States to begin telling them those things in earnest.
Ilan Berman is Vice President of the American Foreign Policy Council in Washington, DC.
Image: Wikicommons.