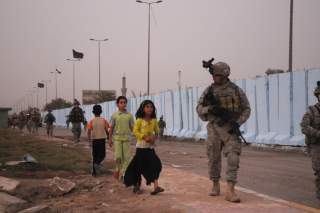 War is one of the greatest engines of technological and organizational change. The 15-year fight against Islamic jihadist terrorist groups has proven this once again. The nature of these conflicts demanded the development of new intelligence, reconnaissance and surveillance technologies, processes and organization. U.S. companies responded with a revolution in sensors, command and control systems, data management and fusion software and platforms. Now they are bringing the capabilities and know-how acquired from the wars in Afghanistan and Iraq back to the U.S. and applying them to the effort to secure the U.S.-Mexico border.

Security along this country’s land and water borders has always been multilayered. As of 2014, 653 of the nearly 2,000 miles of the southern border already has been fenced. The Department of Homeland Security (DHS) has deployed drones, blimps, aerostats and fixed towers with radar and electronic sensors to detect land and air movement across the unfenced portions of the border. The most important layer in this system is people, the thousands of Border Patrol agents that operate along the border and respond to the intelligence produced by these sensors. Access to this country from the sea is managed by the U.S. Coast Guard which does a remarkable job with limited resources. As Chairman of the Homeland Security Committee, Senator Ron Johnson stated, “fencing is not a panacea. We need a layered approach to border security, one that includes technology, manpower, a commitment to the rule of law, and the elimination of incentives for illegal immigration.”

President Donald Trump’s wall will consist of new and additional physical barriers of various kinds depending on the terrain. But it will also include a lot of technology to backstop physical barriers or create a “virtual” wall as the first line of defense in areas with challenging terrain. The use of electronic sensors has long been part of the plan to secure the southern border. A combination of poor planning, immature technology, legal challenges and construction difficulties caused the cancellation of the first effort, known as the Secure Border Initiative. However, in 2014, DHS awarded Elbit Systems of America a contract to build the first section of a new system of fixed towers with advanced third generation radar and infrared sensors to monitor the border.

In the nearly two decades that have passed since the U.S. first sought to create a wall along the southern border, there has been a revolution in the technologies associated with surveillance and threat detection. As a result DHS can leverage existing capabilities, and acquire non-developmental items rather than funding expensive and challenging research and development.

Much of this new technology comes from the U.S. experience and that of our friends and allies in dealing with terrorist threats overseas for more than 15 years. Elbit Systems of America is bringing to the southern border technology based on decades of experience in securing Israel’s borders against penetration. Elta North America, the U.S. subsidiary of another Israeli company, ELTA Systems Ltd., has provided the Custom and Border Protection division of DHS with highly sophisticated mobile radar systems that can detect small drones smugglers use to move drugs across the border. These companies also have developed solutions to the new challenge posed by terrorists’ and smugglers’ tunnels.

Similarly, U.S companies have worked for years to provide high tech surveillance for American forces and bases in Afghanistan and Iraq as well as for allies’ border security. The General Atomics Aeronautical Systems’ Predator B drone being operated today by DHS along the southern border has been a mainstay of the counterterrorist fight against al-Qaeda, the Taliban and ISIS. Lockheed Martin has been a leader in the development of advanced sensors for drones, blimps, vehicles and even fixed towers that support U.S. operations and provide force protection. Its Persistent Threat Detection System, operating aboard blimps, is being tested along the southern border. Sierra Nevada Corporation is a pioneer in the development of manned tactical surveillance platforms such as the MC-12W Liberty as well as leading the world in the area of jammers to counter the electronic triggers for improvised explosive devices.

U.S. companies have become a major force in building advanced border security systems for friends and allies. For example, DRS Technologies is bringing to the challenges of securing the U.S. homeland nine years of experience in Jordan where it is providing mobile and fixed surveillance towers with an integrated communications network and command and control system for Jordanian border security. Raytheon has a similar program underway in Jordan, one that involves the use of sensor-fused border barriers.

Small businesses play in this space too. For example, the Advanced Technology Systems Company has been supporting U.S. Central Command with border surveillance technologies, command and control systems and training. Experience on the ground is vital to learning how to overcome the myriad challenges associated with developing and deploying a viable and layered border security system.

There has never been a border wall or barrier completely impervious to penetration or circumvention. The trick is to create a layered system that, at a minimum, discourages such attempts and, at a maximum, substantially increases the probability of successful detection and interception of those seeking to cross. U.S. companies did this in Afghanistan and Iraq and should be able to do the same along the southern border.