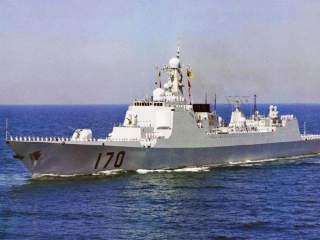 The next major war, should it happen, will require a higher level of coordination among air-, land- and sea-based forces across a larger area than ever before. Such networking is precisely what the Chinese People’s Liberation Army Navy (PLAN) tested this week as it conducted its war games in the South China Sea.

According to the PLA Daily—which is the service’s official publication—at least three destroyers participated along with submarines, early warning aircraft, fighters and other forces. “This battle today was like fighting with your hands and feet bound. It was not fun to play,” Adm. Li Yan, deputy chief of staff of the South China Sea Fleet, told reporters. “However, this feeling is precisely the true state of the battlefield. Only through practicing in a variety of difficult situations in peacetime can you prepared for wartime without panic and focus on winning the war.”

The exercise—which took place in the disputed South China Sea region—covered “thousands of square kilometers of sea.” As such, the vessels and aircraft were highly depended on networking—an expertise in which Chinese forces are making great strikes.

The lead ship participating in the exercise was the Chinese Type 052C destroyer Lanzhou, which was also hosting embedded media onboard. In its published account, the PLA Daily described the Chinese navy’s extensive use of the electromagnetic spectrum during the exercise. “Intelligence information from early warning aircraft, ships and shore-based radar detected and relayed information about the red forces to the command ship Lanzhou’s operations room which correlated and updated the information is real time on a battlefield situation map,” reads a translated version of the account.

The Chinese drills also seem to have extensively incorporated electronic and cyber warfare. The PLA Daily account describes an operating environment where jamming and other electronic attacks were pervasive. For example, it notes two instances where transmissions from an AWACS was jammed—“data transmission is interrupted, unable to provide intelligence support”— and where the information flow was completely disrupted by ‘enemy’ electronic warfare. Indeed, Lanzhou and its task force did not come out ahead during the exercises—and the massive warship was ‘disabled’ during the course of the mock battle.

The Chinese exercises also demonstrated that the PLAN seems to have improved coordination between its air, surface and submarine forces. The PLA Daily description seems to indicate that the naval surface ships coordinated their attacks with submarines and aircraft from multiple different points of the compass. Finally, the Chinese ships also demonstrated their ability plan on the fly as vessels were 'knocked out' or 'sunk.' Indeed, the Type 054A frigate Linyi immediately took command of the situation after Lanzhou was 'disabled.'