War in the South China Sea: Not Worth It 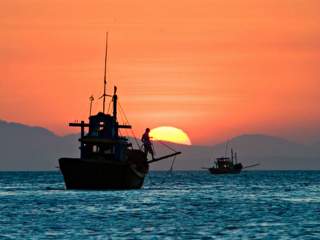 The latest in tensions between the United States and China is the landing of a Chinese military aircraft on Fiery Cross Reef, one of several man-made islands built by China in the Spratly Island chain in the South China Sea. The Chinese claim the landing was for a humanitarian operation to evacuate three ill workers, but the Pentagon is troubled that China used a military plane instead of a civilian one and wants assurances from China that it has no plans to deploy or rotate military aircraft in the Spratlys, as previously promised.

The U.S. concern over Chinese actions revolve around the some $5 trillion in oceanic commerce that passes through the South China Sea and the need for unimpeded navigation that is crucial to the economies of Japan, South Korea, Australia and other countries in the region. If China does pose a threat to trade routes (itself a questionable proposition given China’s position as both a supplier and consumer in international trade), why should the United States—whose homeland is thousands of miles away—take the lead and risk military confrontation with China? As an option of last resort, the America can play a supporting role, but the primary responsibility should rest with those nations in East Asia who are more directly threatened and stand to lose the most.

Unfortunately, those countries have no incentive to shoulder that burden as long as the United States is willing to bear the expense and incur the risk via forward deployed forces. Just as is the case in Europe, U.S. allies in East Asia have minimal incentive to pay the costs for their own security and will free ride as long as Uncle Sam foots the bill. With over $19 trillion in national debt—China being largest foreign debt holder, owning about $1.2 trillion of U.S. debt according to the Department of Treasury—the United States cannot afford to protect and police the entire world, particularly when American interests are not directly at stake.

Still, Washington sent the USS John C. Stennis carrier strike group (CSG) to the South China Sea as a show of force. The acquisition cost of a CSG is on the order of $13 billion, and it costs $6.5 million a day to simply operate a CSG. These are not costs the United States should bear.

Indeed, U.S. allies in the region are more than capable of underwriting military expenditures for their own collective security needs. The combined economy of Japan, South Korea, Taiwan, Australia, New Zealand, the Philippines, Vietnam and Malaysia—all of whom have a stake in what happens in the South China Sea—is on the order of $9 trillion, which compares favorably to China’s $14 trillion economy. Arguably, Thailand (GDP $1 trillion) and India (GDP $2.4 trillion) also have an interest.

Ultimately, China’s man-made islands in the South China Sea do not imperil U.S. national security. Certainly, they are not worth the possibility of U.S.-Chinese military confrontation. Instead of being the first line of defense and directly involved in a regional dispute, the United States would be better off untangling itself from a needless entanglement.

Charles V. Peña is a senior fellow at the American Security Initiative Foundation. He has more than twenty-five years of experience as a senior analyst and program manager, supporting both the Department of Defense and Department of Homeland Security. Peña is the former Director of Defense Policy Studies at the Cato Institute and author of Winning the Un-War: A New Strategy for the War on Terrorism (Potomac Books).