Warning: Turbulence Ahead for the Russia-India Stealth Fighter 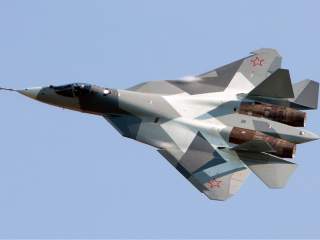 An $11 billion deal between Moscow and New Delhi to jointly develop a stealthy fifth-generation fighter is on the verge of collapse. A recent meeting between Indian prime minister Narendra Modi and Russian president Vladimir Putin at the Kremlin does not seem to have broken the impasse.

According to India Today, New Delhi has lost confidence in the Russian T-50 PAK-FA effort after Moscow truncated its buy to about a squadron's worth of jets. The prevailing view within the Indian air force is that if Russia—which is the senior partner—is backing out of the program, then it will be left as the sole operator of an aircraft that largely fails to meet its requirements.

The Indians have been disappointed by the lack of genuine co-development work on the stealthy PAK-FA, which it has invested in heavily. Moreover, the Indians are concerned about the jet’s stealth capabilities, avionics and engines—the current NPO Saturn AL-41F1 engines are not adequate to power the fifth-generation warplane. But the straw that has apparently broke the camel’s back is that Russia has curtailed its PAK-FA buy, which New Delhi views as a signal that the Moscow itself doesn’t have faith in the T-50.

Indeed, the Russian air force is only planning to buy about a dozen PAK-FAs until the more powerful izdeliye 30 engines are developed. Instead of buying PAK-FA, Russia is planning to continue production of advanced Su-30 and Su-35 Flanker variants.

The Indian Express had reported earlier that the Russian had offered to drop the PAK-FA’s price tag to $3.7 billion from the original $6 billion, but the Indians are still balking at the cost. Moreover, the Indians are not happy that they did not participate in the development process for the jet.

“Now that they already have the fighter, the Russians have made a revised offer to us. For $3.7 billion, they will give us all the technological know-how of making the fighter. We will also get three prototypes from them in that amount,” a senior Indian defense ministry official told the paper.

Nonetheless, even with the revised Russian offer, the Indian air force—whose version of the T-50 is called the Fifth Generation Fighter Aircraft (FGFA)—wants to pull out of the deal. “We are not in favor of the FGFA,” an Indian air force official told the Indian Express. “The PAK FA fighter is too expensive at even this rate, and we are not sure of its capabilities.”

In addition to the failing accord to co-develop the FGFA, the talks between India and Russia failed to conclude a deal for New Delhi to purchase the S-400 surface-to-air missile system. India has stated that it wants to buy the next-generation air and missiles defense system—but Russia is thought to have linked that potential purchase to the PAK-FA deal.